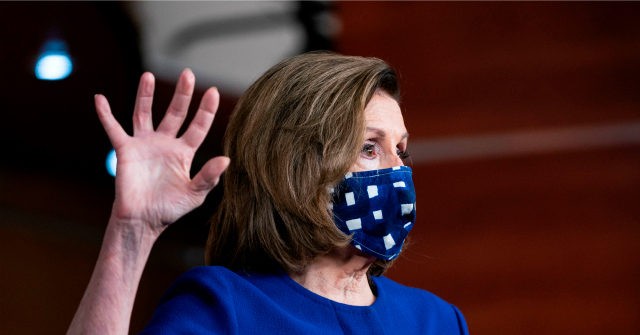 “Excuse me. I’m not answering,” the speaker said, interrupting the reporter and waving her off in the middle of the question. “I’m not answering those questions. We’re talking about the coronavirus.”

“I don’t have all day for questions. That’s what we’re taking now. Anybody have a question on the coronavirus negations?” she continued:

.@SpeakerPelosi snaps at a reporter asking her about Hunter Biden: “I’m not answering those questions — we’re talking about the coronavirus.” pic.twitter.com/p71CSpq8l2

“In other words, Hunter was being paid for access to his vice president father who was specifically put in charge of Ukraine and Russia,” President Trump said following the revelation.

Breitbart News has since gained access to thousands of emails from Bevan Cooney, a former business partner to Hunter Biden, who is currently in prison for his involvement in a bond fraud investment scheme:

In the meantime, however, Cooney—who is serving his sentence in federal prison—reached out to Schweizer via conservative journalist Matthew Tyrmand and provided written authorization to access his Gmail account. He provided the password and username, and written authorization to publish emails because Schweizer says he believes he was the “fall guy” for the Biden family’s corruption and that he believes the public needs to know what really happened in Hunter Biden’s universe. The first article on these emails was published Friday afternoon, and detailed how Hunter Biden and his partners secured meetings with senior White House officials in November 2011 for Chinese Communist elites—including, as the Chinese elites who were present revealed, a secret meeting with then-Vice President Joe Biden himself. The Biden campaign has not responded to requests for comment about this from Breitbart News.

As Breitbart News senior contributor and Government Accountability Institute (GAI) President Peter Schweizer explained, “What’s very clear” from the emails is the fact that “Hunter brings no money to the table.” Rather, he is seemingly valued because of his connections to the White House, via his father.

“There are emails that talk about how they are going to do business deals where they want to get union pension money and that Hunter is going to leverage the relationships that his dad has with public employee unions to get that money,” he told Breitbart News Saturday.

“So part of it is just kind of a feel for what is the Biden business model, and we kind of knew this in a way but here it’s very explicit that it is trading off the Biden name, the Biden connections, and the Biden access,” he added.

This week, Biden insider Tony Bobulinski released a public statement, affirming one of the emails revealed by the Post.

“I am the recipient of the email published seven days ago by the New York Post which showed a copy to Hunter Biden and Rob Walker,” he said. “That email is genuine.”

The new allegations call into question the claim Biden made last year, telling reporters, “I have never spoken to my son about his overseas business dealings.”

He has since failed to address the mounting allegations, dismissing them as part of a “last-ditch effort in this desperate campaign to smear me and my family.” Similarly, Dr. Jill Biden has rejected the allegations, calling them nothing more than “distractions.”