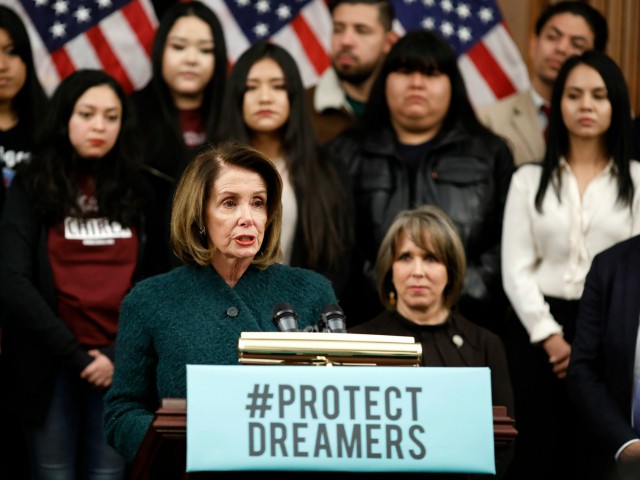 House Minority Leader Nancy Pelosi (D-CA) promised over the weekend to pass the Dream Act in the new Congress, which would provide amnesty to millions of illegal immigrants.

Pelosi, who will likely become the next speaker of the House in January, said in a statement on Saturday that she will work to pass the Dream Act with her new House Democrat majority.

“America draws strength from our long, proud heritage as a nation of immigrants. In the Majority, Democrats will work to reverse the Republicans’ destructive anti-immigrant agenda,” Pelosi contended. “Our House Democratic Majority will once again pass the Dream Act to end the uncertainty and fear inflicted on patriotic young men and women across the country.”

Pelosi released the statement in response to a letter from the Congressional Hispanic Caucus, which urged Pelosi to take up legislation in the first 100 days of the new term to protect Deferred Action for Childhood Arrivals (DACA) illegal aliens and Temporary Protected Status (TPS) refugees. The Hispanic Caucus stressed that any new legislation should include a “pathway to citizenship,” “an end to immigration laws that tear families apart,” an end to the “militarization of our borderlands,” and a “recommitment to our nation’s founding ideals as a place of refuge for those seeking protection at our borders.”

“Undocumented immigrants work hard, obey the laws, and pay taxes. They are our friends and neighbors. They are part of the American social fabric and deserve a pathway to the American dream,” the Hispanic group added in the letter.

Rep. Adriano Espaillat (D-NY), one of the lawmakers who signed the letter to Pelosi, told CBS News that Democrats should move “expeditiously” in January to pass legislation to shield illegal immigrants and TPS refugees from deportation, without funding a wall on America’s southern border.

“I think the Dream Act should be taken on alone, with no poison pills attached to it,” Espaillat said.

President Donald J. Trump and congressional Republicans contended they could only consider some form of amnesty for illegal aliens if it were tied to wall funding as well as pro-American immigration reform such as E-Verify, ending chain migration, and ending the diversity lottery.

Espaillat said, “These young people are still in limbo. Had it not been for the courts, they would probably be underground. They would be in the shadows.”

President Trump reiterated his threat of a government shutdown if Democrats do not give him wall funding in December.

“We would save Billions of Dollars if the Democrats would give us the votes to build the Wall,” Trump tweeted on Monday. “Either way, people will NOT be allowed into our Country illegally! We will close the entire Southern Border if necessary. Also, STOP THE DRUGS!”

We would save Billions of Dollars if the Democrats would give us the votes to build the Wall. Either way, people will NOT be allowed into our Country illegally! We will close the entire Southern Border if necessary. Also, STOP THE DRUGS!