“It has to be government-wide,” she eluded to the judiciary as a condition of the popular legislative initiative.

Pelosi’s contingency would perhaps create another roadblock to passing the ban. She and her husband raked in $4.8 million dollars on tech options in July, though the speaker denies she owns any of the stocks.

“The third branch of government, the judiciary, has no reporting,” Pelosi elaborated on the condition. “The Supreme Court has no disclosure. It has no reporting of stock transactions. And it makes important decisions every day.”

On Wednesday before Pelosi’s press conference, reporting revealed she had become favorable to the idea of a stock trading ban and had begun discussing particulars with her lieutenant of the House Administration Committee.

But the reporting also revealed many complicated particulars of enacting a ban, such as if exemptions should exist for pre-elected portfolios, capital gains taxes, and family members, among other considerations.

“It’s complicated, and members will figure it out, and then we’ll go forward with what the consensus is,” Pelosi said Wednesday, adding that she expects her party to reveal a proposal soon.

Pelosi’s willingness to discuss a stock ban is a change of position from December, when she defended congressional stock trading as participation in a “free market economy.” Soon after her defense, Sen. Jeff Merkley (D-OR) slammed Pelosi’s stock trading activity, which allegedly sways her legislative judgment. 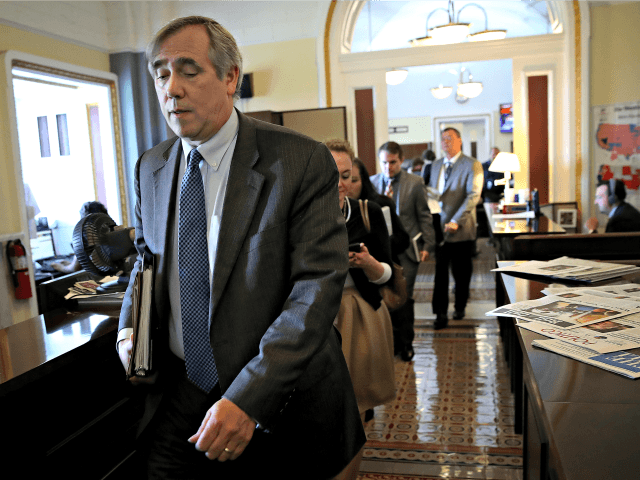 According to UnusualWhales.com, vast amounts of stocks are traded by lawmakers, the worse offenders being Republicans:

I have just released the full trading report on politicians in 2021.

In short, many beat the market.

They traded more than ever before.

And they made numerous unusually timed trades, resulting in huge gains.