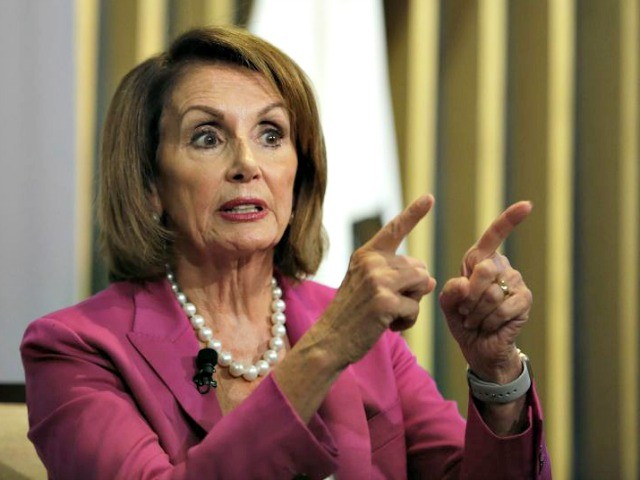 House Minority Leader Nancy Pelosi (D-CA) says that if the Democrats take back the House in the 2018 midterm elections, none of them will vote for President Trump’s wall along the U.S.-Mexico border.

In an interview with Politico, Pelosi detailed her plans — or lack thereof — for the U.S.-Mexico border and national immigration policy, which does not include Trump’s proposed border wall.

“I don’t see any of us voting for wall funding,” Pelosi said.

“We have a responsibility to secure our borders,” Pelosi said. “There are ways to do that that are consistent with civilization, humanitarianism, and who we are as a nation. We have to remove all doubt about that.”

Pelosi’s hinting that Congress must “remove all doubt” that the U.S. is humane could come in the form of House and Senate Democrats’ plan to end all immigration enforcement across the nation, including the abolishment of the Immigration and Customs Enforcement (ICE).

As Trump said at a recent campaign rally, every Senate Democrat has signed onto Sen. Dianne Feinstein’s (D-CA) proposal that would abolish and end all immigration and border enforcement across the U.S., allowing the 12 to 30 million illegal aliens living in the country and all future illegal aliens to be free to travel back and forth across the hemisphere without enforcement or protections for Americans.

The Senate Democrat plan would also likely ban any and all federal arrests of illegal aliens. The legislation has earned the nickname, the “Child Trafficking Encouragement Act,” as it allows illegal alien smugglers to freely traffic children into the U.S. without the fear of arrest.