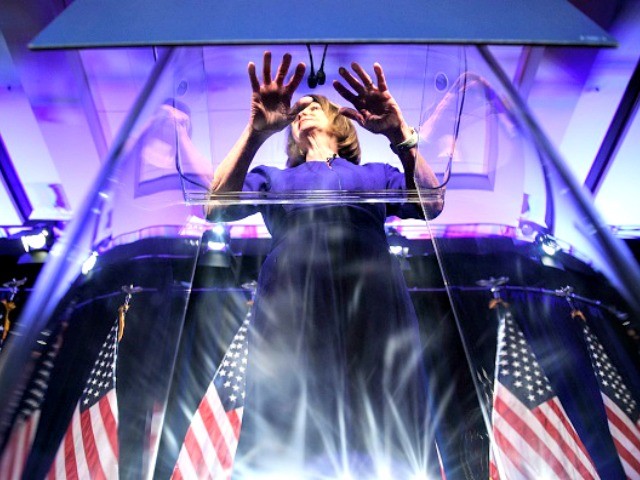 Speaker of the House Nancy Pelosi (D-CA) published a statement and a series of tweets on Friday suggesting that Russian President Vladimir Putin was controlling President Donald Trump through the use of secrets about him.

She also alleged “top Trump campaign officials” attempted “to influence the 2016 election and subvert the will of the American people,” referring to the indictment Friday of Roger Stone, who played a minor role in the campaign.

Roger Stone’s indictment makes clear there was a deliberate, coordinated effort by top Trump campaign officials to subvert the will of the American people during the 2016 Election. #FollowTheFacts

What does Putin have on @realDonaldTrump, politically, personally or financially?

Why has the Trump Administration continued to discuss pulling the U.S. out of NATO, which would be a massive victory for Putin?

Pelosi’s claims repeat the accusations of the so-called “Russia dossier,” an uncorroborated document produced by the Hillary Clinton campaign and the Democratic National Committee through the Fusion GPS opposition research firm, based on information from a former British spy relying on Russian government sources, and funded illicitly through the Perkins Coie law firm in payments that were not properly declared to the Federal Elections Commission.

The “dossier” provided the basis for surveillance of Trump campaign associates by the Federal Bureau of Investigation (FBI) after the document was presented to a Foreign Intelligence Surveillance Act (FISA) court without specifically identifying the political provenance of the research, whose claims were never verified.

Despite nearly two years of investigation by Special Counsel Robert Mueller, no evidence has been found of collusion between the Trump campaign and Russia. The media, however, have pounced on every new shred of information about the investigation as if it might provide the elusive proof, and Democrats are using their new investigative powers in the U.S. House of Representatives to pursue the charges, with some urging impeachment.

Pelosi did not mention any of the numerous actions taken by the Trump administration against Putin and Russia, including but not limited to: attacking Russia’s Syrian proxy for using chemical weapons; sending military aid to Ukraine; urging European firms to pull out of a natural gas pipeline project with Russia; declaring that the U.S. will withdraw from the Intermediate-Range Nuclear Forces Treaty over Russian violations; pulling out of the nuclear deal with Iran, over Russian objections; and imposing various sanctions on Russia.

Pelosi also did not mention the many attempts by the Obama administration to appease Russia, with Democratic Party support, including but not limited to: canceling a missile defense treaty with American allies in Europe; giving up U.S. nuclear arms in the “New START” treaty; failing to help Ukraine; and promising Putin more “flexibility” after the 2012 elections.

The Speaker published her tweets hours after winning a showdown with Trump over re-opening the government.