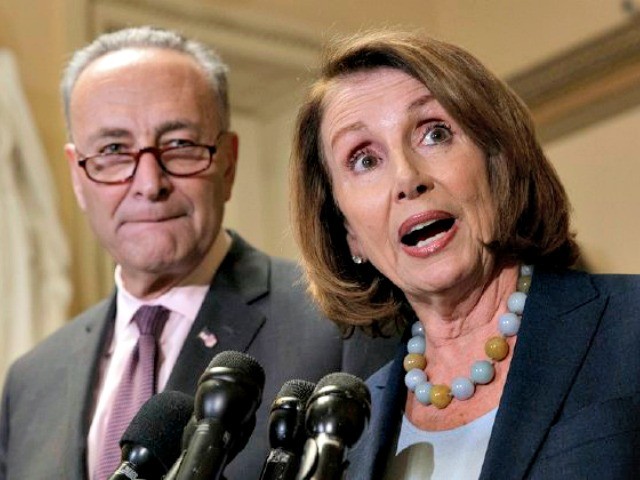 Earlier Monday evening, Trump declared in the Rose Garden at the White House that he would end the riots that had sprung up around the legitimate protests against the death of George Floyd in the custody of Minneapolis police.

He then walked across Lafayette Park, which had been a flashpoint for violent protest for several nights, and had been cleared by tear gas before Trump’s statement. The president, flanked by security and senior officials, walked across the street to St. John’s Church, which had been burned by rioters the night before, and held a Bible aloft before departing.

Pelosi and Schumer issued a statement denouncing what they called Trump’s “press conference and photo-op”:

Across our country, Americans are protesting for an end to the pattern of racial injustice and brutality we saw most recently in the murder of George Floyd.

Yet, at a time when our country cries out for unification, this President is ripping it apart. Tear-gassing peaceful protestors without provocation just so that the President could pose for photos outside a church dishonors every value that faith teaches us.

We call upon the President, law enforcement and all entrusted with responsibility to respect the dignity and rights of all Americans. Together, we must insist on the truth that America must do much more to live up to its promise: the promise of liberty and justice for all, which so many have sacrificed for – from Dr. King to John Lewis to peaceful protestors on the streets today.

At this challenging time, our nation needs real leadership. The President’s continued fanning of the flames of discord, bigotry and violence is cowardly, weak and dangerous.

Violence, protests, looting and clashes with police continued throughout the country on Monday evening.