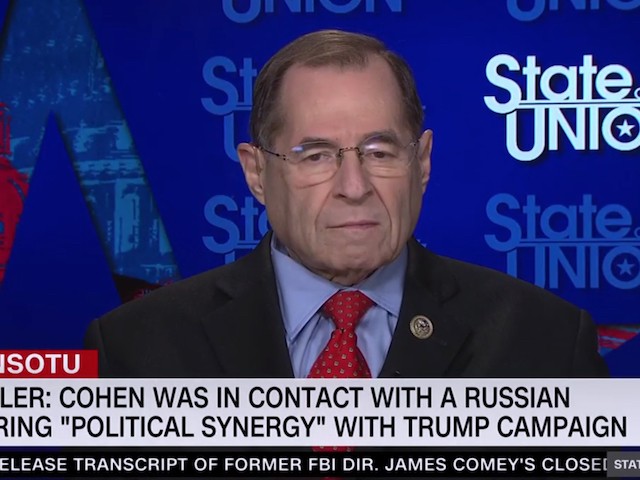 Sunday on CNN’s “State of the Union,” likely incoming chairman of the House Judiciary Committee Rep. Jerry Nadler (D-NY) said if President Donald Trump did direct his lawyer Michael Cohen to commit federal campaign finance felonies by paying off women Trump has extramarital relationships with not only was it a “massive fraud,” but it is also likely an impeachable offense.

TAPPER: I want to read a key line from the southern district of New York filing Friday. Quote ‘With respect to both payments Cohen acted with the intent to influence the 2016 presidential election in particular and as Cohen himself has now admitted with respect to both payments, he acted in coordination with and at the direction of individual one.’ Individual one, of course, is President Trump. So, that’s crystal clear. Federal prosecutors are saying that the president ordered Michael Cohen to commit two federal campaign finance felonies. In your view, does that rise to the level of an impeachable offense?

TAPPER: If it is proven that the president directed or coordinated with Cohen to commit these felonies —I understand it’s been alleged but not yet proven — if proven, would they be impeachable offenses?

NADLER: They would be. Whether they’re important enough to justify an impeachment is another question. Certainly they’re impeachable offenses. Even though they were committed before the president became president, they were committed in the service of fraudulently obtaining the office. That would be an impeachable offense. The fact of the matter is that what we see from these indictments and charging statements is a much broader conspiracy against the American people, involving these payments, involving an attempt to influence the campaign improperly, with improper payments involving the Russians, trying to influence the campaign, involving the president lying for an entire year about his ongoing business arrangements—business dealings with the Russians, involving obstruction of justice. All of these have to be looked at very seriously by the Congress, by the special counsel and by the Justice Department and to see what actions we should then take. What is clear also is that the Republican Congress absolutely tried to shield the president. The new Congress will not try to shield the president. We will try to get to the bottom of this in order to serve the American people and to stop this massive fraud on the American people.