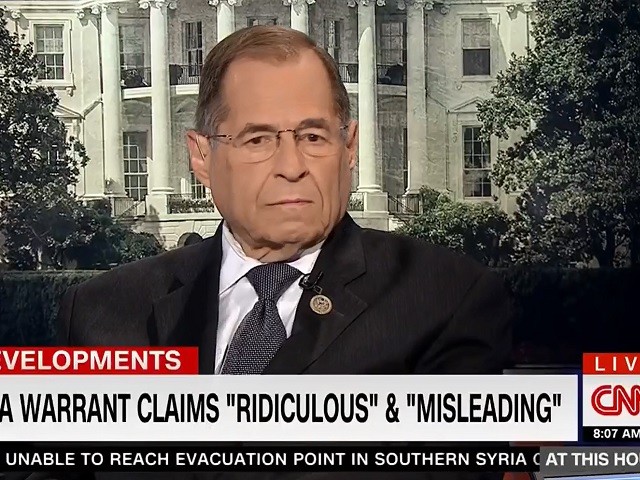 In the wake of President Donald Trump’s former personal attorney, Michael Cohen, pleading guilty to lying to Congress in regards to the investigation into Russian collusion in the 2016 election, Rep. Jerry Nadler (D-NY) on CNN’s “New Day” said President Donald Trump “is right to be nervous right now.”

Nadler reasoned Friday, “[I]t appears time is running out when he can hold himself above the law.

“One of the central focuses of the investigation is we have known, it has become very clear that the Trump campaign colluded with the Russians in trying to subvert the election –” he continued before host Alisyn Camerota interrupted.

“Hold on,” Camerota stated. “How can you say that so definitively, that they’ve colluded?”

“Well, the fact that Manafort and Trump Jr. met with Russian agents who told them they wanted to give them dirt on Hillary as part of the Russian government’s attempt to help them and they said fine,” Nadler replied. “It’s clear that the campaign colluded — there’s a lot of evidence to that. The question is, was the president involved, did he know about it?”

Nadler added that Cohen being involved in arranging business deals with Russians on Trump’s behalf during the campaign and former Trump campaign manager Paul Manafort working with WikiLeaks’ Julian Assange are “indications” of Trump’s “personal involvement” in colluding with Russia.