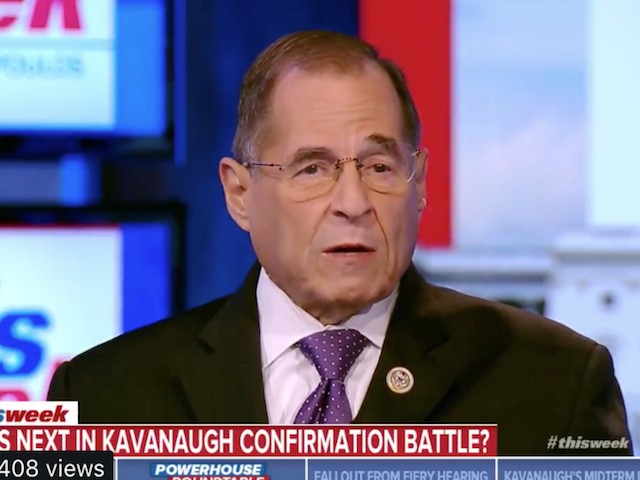 Sunday on ABC’s “This Week,”  Rep. Jerry Nadler (D-NY) said if Supreme Court associate justice nominee Brett Kavanaugh were confirmed to be on the Supreme Court and the Senate had not investigated, the House would take up its own investigation on “any credible allegation” of perjury and “other things that haven’t been properly looked into.”

Nadler said, “I hope the Senate would have done its job first. I hope the FBI has over the next week to investigate… If they don’t, they have a real problem. I hope Senator Flake and others would make clear that their votes will not be for the nominee unless there’s a free hand for proper investigation of these very serious allegations of sexual assaults. We can’t have a justice on the Supreme Court for the next several decade who is will be deciding questions of liberty, life, death, all kinds of things for the entire American people who has been credibly accused of sexual assaults and various other things, wrong things, including perjury. This has to be thoroughly investigated. I hope the Senate will do so. If he’s on the Supreme Court and the Senate hasn’t investigated, the House will have to.”

He added, “We would have to investigate any credible allegations of perjury and other things not properly looked into before.”