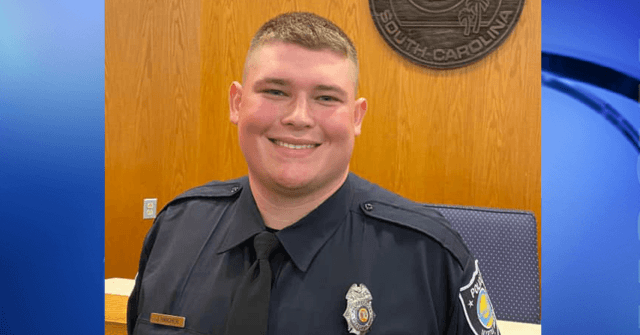 A police officer was shot and killed Saturday during a shooting near Yaupon Drive and 14th Ave. South in Myrtle Beach, South Carolina.

“According to an incident report from the South Carolina Law Enforcement Division, officers from the Myrtle Beach Police Department were responding to a domestic call around 10 p.m. Saturday night,” Fox 8 reported.

Police officers and a man exchanged gunfire in the 400 block of 14th Ave. South, authorities said.

Myrtle Beach Police Department (MBPD) Officer Jacob Hancher, a four-year Community Officer who had served as a policeman for under one year, died during the shooting.

A second officer was also shot and transported to a local medical facility with non-life threatening injuries. Authorities later found the shooting suspect dead and no other injuries were reported.

During a press conference Sunday, Myrtle Beach Police Chief Amy Prock described Hancher as a “dedicated public servant who upheld his oath to protect this community and made the ultimate sacrifice”:

“Today we are mourning the loss of one of our officers, PFC Jacob Hancher was killed in the line of duty while responding to a call for service. Officer Hancher has been with the Myrtle Beach Police Department for four years as a Comunity Service Officer…https://t.co/RlZsxKoIfo pic.twitter.com/ufc9I0mK0R

“He cared about the people that he served, served with, and absolutely loved Myrtle Beach,” Prock continued.

In a Facebook post on Sunday, the Horry County Police Department offered its condolences, saying “Our hearts go out to our brothers and sisters of the Myrtle Beach Police Department as they face the loss of one of their own, PFC Jacob Hancher”:

“MBPD, we stand with you. We will be by your side as you walk this awful path—remember, in this family, no one fights alone,” the post read.

“RIP Hero. This is heartbreaking. Praying for his family, friends, fellow officers, and all who are affected by this tragic loss,” one person wrote.

“I am so saddened by this loss of one of our protectors who wears the blue. Prayers for his family and the citizens of Myrtle Beach who, like me, support our law enforcement officers,” another commented.

Hancher also served as a volunteer with the Horry County Fire Rescue (HCFR).

In a tweet Sunday morning, HCFR offered condolences to the policeman’s loved ones and colleagues:

The #HCFR family is saddened to learn of the death of Jacob Hancher, a @MBPDSC Ofc. who also served Horry Co. as a vol. FF.

Our hearts go out to Hancher’s family, friends, loved ones, law enforcement colleagues and fellow team members here at HCFR during this difficult time.

The shooting was the first time since 2002 that the MBPD has lost an officer in the line of duty, according to the Fox 8 report.