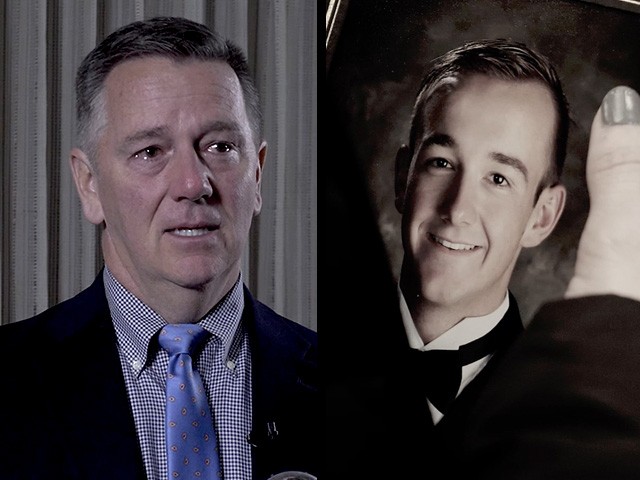 Pierce Corcoran was killed in December and one of the final messages he left behind has spurred his family on to fight for the safety of every American.

His mother, father, and sister shared with Breitbart News the story of Pierce and the illegal alien who killed him. The accounts were filmed the morning after the family tried to visit House Speaker Nancy Pelosi and Senate Minority Leader Chuck Schumer on Capitol Hill and were turned away. It was in the middle of the longest government shutdown in U.S. history and while Democrats refused to even negotiate funding for border security and a border barrier.

Pierce Corcoran, 22, was killed less than a month ago, December 29, 2018, when authorities say an unlicensed illegal alien smashed headfirst into the vehicle Pierce was driving.

“He kept us on our toes since the moment he came into this world,” angel mom Wendy Corcoran said of her youngest child.

“He looked at things really simple, ya know there’s right and there’s wrong,” angel dad D.J. Corcoran said. “He was just starting to develop into a young man.” Pierce and his girlfriend were “crazy about” each other and he had bought a ring for her before he was killed.

Angel sister Avery Corcoran said he would always make a point, even when he was busy, to talk, “He made you feel special.”

The family recounted each of their own experiences of the day that Pierce was struck and killed. D.J. Corcoran, a firefighter, was out of town for another job. He received a notification of a back wreck back home, knew his son drove that route, and tried to call, but couldn’t get a hold of his son.

“I just wanted to be with my family,” said D.J. of the moment he got the news. Firefighters from precincts on the route between D.J. and home ferried him car to car to get the shocked father back to the rest of his family.

Wendy Corcoran recalled the knock on the door that was firefighters coming to tell her that her son was in a wreck and “didn’t make it.” She agonized over how to tell her husband and other children, “how am I going to repeat the words I just heard?”

Avery recalled visiting the impound lot where her brother’s mangled car had been taken. She looked inside and wedged there between the windshield and dash was her brother’s journal covered in shattered glass.

D.J. recalled seeing his son in the morgue the next day, “I remember just looking at my baby and just laying there and it was hard.”

“It’s still new and we are still dealing with the reality every day that, that there’s not going to be another family picture with him in it, another vacation with him there, another holiday, another birthday, so for us, it’s the worst time we’ve ever had to face,” said Wendy.

D.J. expressed that the family doesn’t harbor hate for the offender, but that there was neglect. He empathized with other angel families and recalled trying to voice their experiences to House Speaker Pelosi and Sen. Schumer. Neither legislator would meet with the families.

President Donald Trump warned in his reopening announcement that if Democrats and Republicans in Congress are unable to reach an agreement on funding these vital border measures by February 15, he will either allow the government to shut down again or will exercise the option of declaring a national emergency to build a border barrier and begin securing the U.S. southern border.