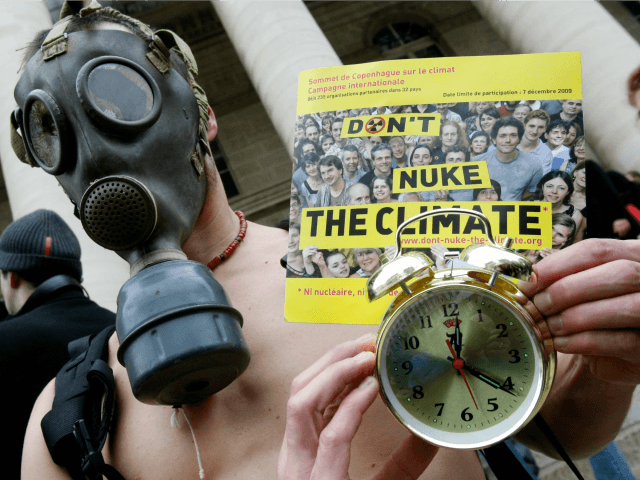 In its latest hysterical bulletin, the UN’s Intergovernmental Panel on Climate Change (IPCC) has urged that we need to spend $2.4 trillion a year between now and 2035 to avoid the potentially catastrophic consequences of ‘climate change.’

But the truth is that ‘climate change’ – at least as perceived by the IPCC – is bunk and all that expenditure (which, added up, amounts to a sum greater than the entirety of global GDP) would be a complete waste of money.

Or, as Professor Richard Lindzen, arguably the world’s greatest expert on the subject rather more elegantly put it in a lecture in London last night:

An implausible conjecture backed by false evidence and repeated incessantly has become politically correct ‘knowledge,’ and is used to promote the overturn of industrial civilization.

Lindzen, who for 30 years was Alfred P. Sloan Professor of Meteorology at the Massachusetts Institute of Technology, is probably the scientist most loathed and feared by the climate alarmist establishment. That’s because he knows the subject rather better than they do and has never been bested in argument.

He is withering in his contempt for man-made global warming theory, as he demonstrated in some scientific detail at the annual lecture of the Global Warming Policy Foundation in London, hosted by its president (Margaret Thatcher’s Chancellor of the Exchequer) Lord Lawson.

You can read the full text here.

The global warming scare has little to do with science, Lindzen began by noting, but is rather the product of ignorance of science.

Hence his lecture title: Global Warming for the Two Cultures.

This was a reference to the influential lecture given in the Fifties by the novelist and physical chemist CP Snow in which he decried the scientific ignorance among the supposedly educated elite.

Little has changed since, said Lindzen:

While some might maintain that ignorance of physics does not impact political ability, it most certainly impacts the ability of non-scientific politicians to deal with nominally science-based issues. The gap in understanding is also an invitation to malicious exploitation. Given the democratic necessity for non-scientists to take positions on scientific problems, belief and faith inevitably replace understanding, though trivially oversimplified false narratives serve to reassure the non-scientists that they are not totally without scientific ‘understanding.’ The issue of global warming offers numerous examples of all of this.

Later he singled out former Secretary of State John Kerry for especial scorn.

Former senator and Secretary of State John F. Kerry is typical when he stated, with reference to greenhouse warming, ‘I know sometimes I can remember from when I was in high school and college, some aspects of chemistry or physics can be tough. But this is not tough. This is simple. Kids at the earliest age can understand this’. As you have seen, the greenhouse effect is not all that simple. Only remarkably brilliant kids would understand it. Given Kerry’s subsequent description of climate and its underlying physics, it was clear that he was not up to the task.

Lindzen’s scientific case against the man-made global warming scare is essentially this: the world’s climate is a chaotic system whose workings, even after decades of intense study and billions of dollars of research funding, scientists have but barely begun to comprehend. Yet here they are deciding on the basis of no convincing evidence to pin the blame on just one of the many contributory elements to climate – carbon dioxide – and trying to persuade us that this trace gas is somehow the master control knob.

This notion is so ridiculous, he said, it is close to “magical thinking”.

Now here is the currently popular narrative concerning this system. The climate, a complex multifactor system, can be summarized in just one variable, the globally averaged temperature change, and is primarily controlled by the 1-2% perturbation in the energy budget due to a single variable – carbon dioxide – among many variables of comparable importance. This is an extraordinary pair of claims based on reasoning that borders on magical thinking. It is, however, the narrative that has been widely accepted, even among many sceptics.

Until the late 80s, not even climate scientists subscribed to this theory. It only took off for political reasons and because there was so much money to be made from it.

When, in 1988, the NASA scientist James Hansen told the US Senate that the summer’s warmth reflected increased carbon dioxide levels, even Science magazine reported that the climatologists were sceptical. The establishment of this extreme position as dogma during the present period is due to political actors and others seeking to exploit the opportunities that abound in the multi-trillion dollar energy sector.

Elites are much more susceptible to this nonsense than ordinary people.

As Lindzen explained, elites are less interested in truth than in what is convenient.

1. They have been educated in a system where success has been predicated on their ability to please their professors. In other words, they have been conditioned to rationalize anything.

2. While they are vulnerable to false narratives, they are far less economically vulnerable than are ordinary people. They believe themselves wealthy enough to withstand the economic pain of the proposed policies, and they are clever enough to often benefit from them.

3. The narrative is trivial enough for the elite to finally think that they ‘understand’ science.

4. For many (especially on the right), the need to be regarded as intelligent causes them to fear that opposing anything claimed to be ‘scientific’ might lead to their being regarded as ignorant, and this fear overwhelms any ideological commitment to liberty that they might have.

None of these factors apply to ‘ordinary’ people. This may well be the strongest argument for popular democracy and against the leadership of those ‘who know best.’

The scientists, meanwhile, don’t know nearly as much as they pretend they know. And in any case, many of them have been corrupted by money or their left-wing politics.

1. Scientists are specialists. Few are expert in climate. This includes many supposed ‘climate scientists’ who became involved in the area in response to the huge increases in funding that have accompanied global warming hysteria.

Scientists are also acutely and cynically aware of the ignorance of non-scientists and the fear that this engenders.

But what about all the scary “proof” that global warming is happening? Lindzen has no truck with any of it.

What about the disappearing Arctic ice, the rising sea level, the weather extremes, starving polar bears, the Syrian Civil War, and all the rest of it? The vast variety of the claims makes it impossible to point to any particular fault that applies to all of them. Of course, citing the existence of changes – even if these observations are correct (although surprisingly often they are not) – would not implicate greenhouse warming per se. Nor would it point to danger. Note that most of the so-called evidence refers to matters of which you have no personal experience. Some of the claims, such as those relating to weather extremes, contradict what both physical theory and empirical data show. The purpose of these claims is obviously to frighten and befuddle the public, and to make it seem like there is evidence where, in fact, there is none.

Just to repeat that last important point: Lindzen believes that there is no real-world evidence that supports man-made global warming theory. None.

What we will be leaving our grandchildren is not a planet damaged by industrial progress, but a record of unfathomable silliness as well as a landscape degraded by rusting wind farms and decaying solar panel arrays. False claims about 97% agreement will not spare us, but the willingness of scientists to keep mum is likely to much reduce trust in and support for science. Perhaps this won’t be such a bad thing after all – certainly as concerns ‘official’ science.

There is at least one positive aspect to the present situation. None of the proposed policies will have much impact on greenhouse gases. Thus we will continue to benefit from the one thing that can be clearly attributed to elevated carbon dioxide: namely, its effective role as a plant fertilizer, and reducer of the drought vulnerability of plants. Meanwhile, the IPCC is claiming that we need to prevent another 0.5◦C of warming, although the 1◦C that has occurred so far has been accompanied by the greatest increase in human welfare in history. As we used to say in my childhood home of the Bronx: ‘Go figure’.