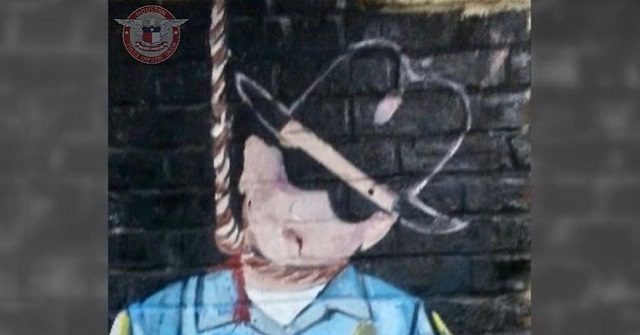 HOUSTON, Texas — A mural depicting a peace officer hanging from a noose was discovered on the side of a building in Houston, Texas. The discovery came during the week where thousands of George Floyd protesters took to the streets of the Bayou City to stand against police violence.

The police union chief posted the image on Facebook and said, “We are better than this Houston. Also, the dirtbag who painted this didn’t even get our uniform shirt right.”

He added, “We realize emotions are running high, but this solves nothing and helps nothing. We are very thankful to the owner of this property, who after discovering this hateful graffiti, painted over it immediately. This image does not represent the view of 99.9% of Americans and we will not let hate run our city. We are #HoustonStrong.”

“If anyone has any information on who painted this abhorrent image, feel free to slide into our DMs. #BeBetter.”

The comments reacting to the Facebook post expressed support for local police and disgust for the violent depiction. “Pathetic,” “F**k all you Cop Haters!!!,” “Disgusting,” “Evil,” “Awful,” and “This is so sad and frightening,” were just some of the responses.

Another wrote: “Messed up person. Pray for him/her.”

Breitbart Texas reported on the protests in Houston, which have largely been peaceful and nonviolent.

Lana Shadwick is a writer and legal analyst for Breitbart News. She is a trial lawyer who previously served as a prosecutor and family court associate judge in Texas. You can reach Shadwick at Lana@LanaShadwick.com.