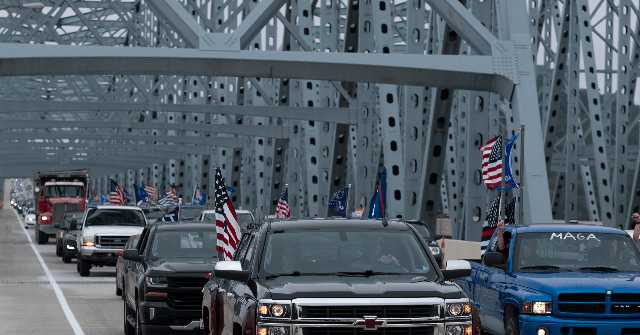 Multiple demonstrations in support of President Donald Trump are being planned in the Cincinnati, Ohio, area this weekend, according to several Facebook events.

Here is a list of the following pro-Trump events taking place in the area:

‘Trump Parade Cincinnati Ohio Fill The Loop Round 2’ is set to take place at 10 a.m. on Saturday and will circle the I-275 bypass, according to a Facebook event describing the rally. Organizers have set up more than 35 staging areas for cars to get on the highway in multiple states, including locations in Ohio, Indiana, and Kentucky.

A vehicle parade in support of Trump and the pro-police organization “Back the Blue” is scheduled to take place Sunday at 2 p.m. at the Clinton County Fairground in Wilmington, according to a Facebook event. Participants are asked to decorate their vehicles with their thin blue line flags, Trump/Pence flags, and American flags.

All vehicles must stay in a single file line throughout the parade route.

Cincinnati is not the only place where there have been a lot of pro-Trump rallies and parades lately. Hundreds of Trump supporters gathered for a car parade on Sunday in Erie, Pennsylvania, and a pro-Trump car parade that was 30 miles long made its way through Phoenix that same day.