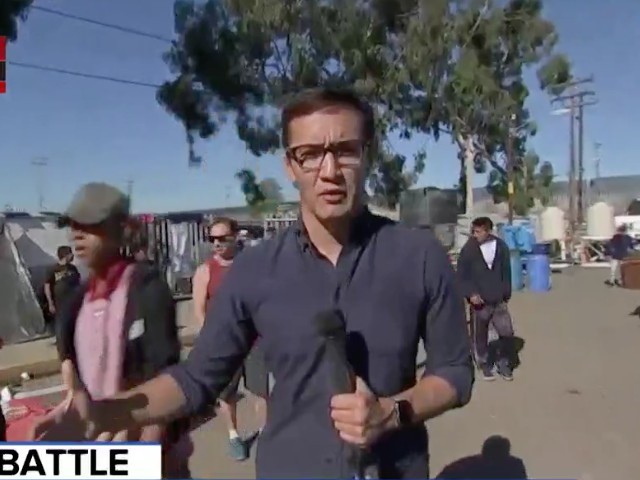 During a segment on MSNBC that aired on Monday, reporter Gadi Schwartz admitted that most migrants in the U.S.-Mexican border city of Tijuana who traveled with the Central American caravan were not women and children. Instead, he said they were men, and that some of them haven’t shown any “need” for asylum in the United States.

Co-host Stephanie Ruhle set up the question, saying, “Stay on this for a moment, because some people look at these images and they listen to the president, who says, ‘It’s not women and children, it’s stone-cold criminals.’”

She continued, “So, my first question is, you’re in that tent camp, besides that family, give us the profile of who is there mostly, and what are they looking for? Because it seems as though, to your point, they don’t actually have the necessary information so they know, how to cross the border … there could be people yesterday who were running because they thought it was their only chance.”

Gadi Schwartz, who is walking through the migrant camp in Tijuana said (emphasis added):

“Right, and it’s very difficult because this is become such a polarizing issue. If we kind of take a walk, you’ll be able to see for yourself–again, this is the inner sanctum of the shelter, so, you’re going to see a lot of families here, a lot of women and children. But the truth is, the majority of the people that are part of this caravan, especially outside, if we can make our way all the way over there, we’ll show you, the majority of them are men. So when this becomes a polarized political issue in the United States, you have people on one side that point and say, there are women and children here and that is true.”

“And then there are others who point and say, these are men that are trying to cross the border border and that’s true, too. From what we’ve seen, the majority are actually men, and some of these men have not articulated that need for asylum, instead, they have talked about, you know, going to the United States for a better life and to find work.“

Indeed, many migrants, by their own admission, are coming to the U.S. for work and economic opportunity, not for asylum.