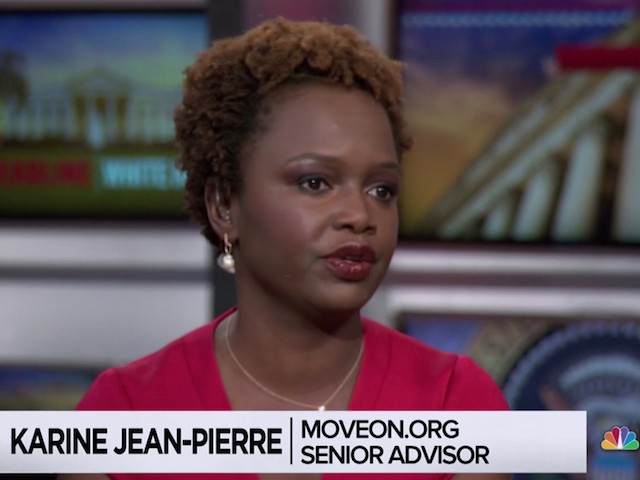 Monday on MSNBC’s “Live,” senior advisor and national spokeswoman for MoveOn.org Karine Jean-Pierre declared the Republican Party had “no moral ground” to criticize Gov. Ralph Northam (D-VA) over the controversy surrounding his medical school yearbook photo of people in blackface and a Klan robe.

Jean-Pierre said, “I think that is one of the problems with how Ralph Northam has handled this. You’re right, it shouldn’t be about politics. It should be about doing the decent thing, the right thing. He doesn’t seem to understand exactly what he did and why that photo, even if he is in the photo or not, it is on his yearbook page. He doesn’t seem to grasp why that is so offensive, why that is so horrendous. He goes out and has a press conference. He denies what he said 24 hours prior. Then he makes this weird comment and talks about how he wore blackface, he couldn’t take the shine off his face, how hard it was, and talks about moonwalking. It was embarrassing and shameful and hurtful. Yes, I think that is one of the issues, he hasn’t given, truly shown that he understands and apologized. That is one of the reasons, as well, that he needs to go. He is just not credible anymore. He has no, like I said, no moral authority.”

She added, “I have to say this, about the Republican Party: there’s no moral ground. Yes, now they’re speaking out against Steve King, but they haven’t asked for King to resign. Many of the Republicans speaking out about Ralph Northam, they supported Cory Stewart. They’ve supported Ed Gillespie. I think it’s not the same. It is really different. We have Donald Trump who has shown, like you mentioned, with Charlottesville and other policies, he has really bigoted and racist ways. And he’s still there. Why have Republicans in Congress not stepped up and really made him accountable for the things he’s done and the things that he’s said? It is not the same thing. You have leaders in the Democratic Party that’s going to be in the Democratic primary and who are in already in the Democratic primary for this presidential election who have been really clear about Ralph Northam and denounced him. I think that’s the difference. They’ve said he should resign.”