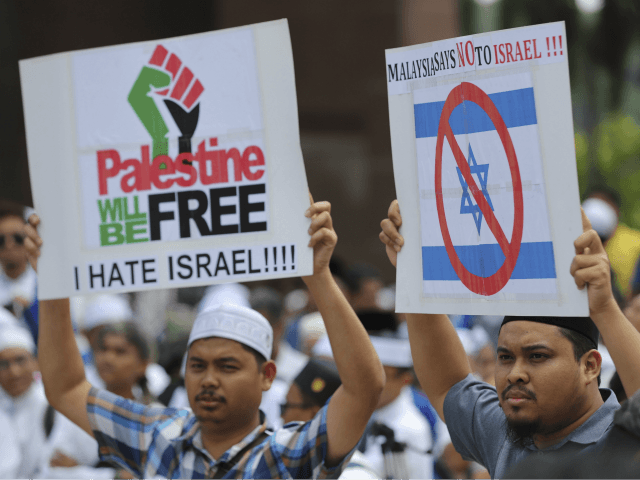 The long-standing platitude that peace can only come to Israel and Palestinian Arabs through the creation of a Palestinian state seems alive and well.

Thus, at the September session of the United Nations General Assembly currently in progress, French president Emanuel Macron promoted its creation, saying that, “There is no other credible alternative to the solution of two states living side by side in peace and security, with Jerusalem as their capital.”

Notably, in this context, President Macron also referred to what he called the “legitimate rights of the Palestinians to achieve sustainable peace.” Even President Donald Trump has recently stated that he is open to discuss Palestinian statehood.

The most compelling reason against establishing a Palestinian state is that neither the Palestinian leadership nor society seek a sovereign state peacefully neighboring Israel. No perusal of Palestinian Arabs’ statements (at least in Arabic, among themselves), sermons, and speeches indicates the slightest desire for such a state. The emphasis, rather, is on diverse forms of eliminating Israel, as unfortunately it has always been.

Every genuine effort at peacemaking in the past century has foundered on Palestinian and wider Arab refusal: the 1937 Peel Commission partition plan; the 1947 United Nations General Assembly partition plan; the 2000 Camp David negotiation and the 2000-2001 Clinton parameters; the 2008 Olmert peace offer; and the 2014 Obama proposal all came to nought based on Palestinian Arab rejection – the last three having proposed full Palestinian statehood on over 90% of the territory of Judea/Samaria (West Bank) and Gaza, with a capital in the eastern half of Jerusalem.

Mahmoud Abbas’ Palestinian Authority (PA) has been emphatic and repetitive in stating that it demands a Jew-free Palestinian state and the implementation of the legally baseless so-called “right of return,” whereby Israel would be inundated by the millions of descendants of Palestinian Arab refugees of the 1948-49 war. No genuine peace can built on either the ethnic cleansing of Judea/Samaria or the dismantling of Jewish sovereignty and independence.

The PA, which holds sway in Judea/Samaria, and Hamas, which rules over Gaza, are sadly all-too-representative of Palestinian Arab opinion. To give one example from among literally dozens that could be cited, a June 2015 Palestine Center for Public Opinion poll found that 49% of Palestinians seek a Palestinian state in place of Israel, while only 29% seek one alongside Israel. Even many of those who seek a neighboring state do not accept the legitimacy of a Jewish state: 88% of Palestinians say Jews have no rights to the land at all.

Add to this the incitement to hatred and murder that pervades the PA-controlled media, mosques, schools, and youth camps, and the outlook, for the present, remains bleak.

That is why even the former Israeli Labor leader, Yitzhak Herzog, who advocates Palestinian statehood, conceded in 2016 that a Palestinian state “won’t happen tomorrow.” And that is why Abbas’s PA has refused even to meet the Israelis at the negotiating table for the past decade.

For these reasons, establishing a Palestinian state is simply a non-starter if genuine peace is the true objective. A Palestinian Arab state, perched on Israel’s longest border, dedicated to murdering Jews and to Israel’s destruction, would enjoy the immunities of sovereignty, enabling it to conclude agreements with like-minded regimes and to import all manner of weaponry to strike Israel. It could also invite foreign forces, like the Iranians, to enter and join in a war on Israel, something precluded under present conditions.

Even elaborate arrangements designed to minimize the risks for Israel founder on certain implacable realities.

For example, many advocates of Palestinian statehood speak of various measures to be incorporated into the security structure of a peace treaty –– such as the imposition of a foreign military force in Judea/Samaria or even the permanent demilitarization of a future Palestinian state. Both ideas are deeply flawed.

International forces have an abysmal record of preventing Arab/Israeli wars. The United Nations Emergency Force (UNEF), designed to keep the peace between Egypt and Israel after the 1956 Suez War, was simply withdrawn at Egypt’s request in 1967, leading to the Six Day War.

The United Nations Interim Force in Lebanon (UNIFIL) never prevented the PLO or, later, Hizballah, from attacking Israel, and has actually become a hindrance to Israel stopping Hezbollah from militarizing the Lebanese-Israeli border, resulting in several wars. International forces and guarantees can vanish overnight.

Foreign forces, even those of an ally like the U.S., have neither the commitment nor compulsion to sustain the casualties that protecting Israel might one day require. U.S. forces have been evacuated from deteriorating military situations in Vietnam and Iraq and Lebanon even where direct U.S. interests were at stake. Are they more likely to hunker down in the Jordan Valley on behalf of Israel?

If foreign forces are no security panacea, neither is Palestinian demilitarization. History demonstrates that no sovereign state has ever permitted itself to be permanently and entirely demilitarized.

Even Weimar Germany — which was in no way then an aggressive, irredentist state, as the PA would undoubtedly become — refused to remain demilitarized. Weimar Germany trained military forces under the guise of police and scouting organizations, and engaged in arms production under civilian cover.

Even purely as a matter of law and treaty, there is no effective means to compel a state to remain disarmed, even if its permanent disarmament were an explicit clause in a peace treaty or international agreement pertaining to that state.

Moreover, only sovereign states can be held to conclude authentic treaties, and the government of a future Palestinian state could realistically claim not to be bound by the demilitarization clauses of the peace treaty that created it.

As it is, the PA has already consistently violated all Oslo Accords limitations on its armed forces. It has imported prohibited weaponry, permitted armed terrorist groups to establish themselves in its midst, and armed far larger forces than those permitted under signed agreements, while refusing to jail and extradite terrorists. How likely is it that a sovereign Palestinian state would be more sedulously observant of such terms than the PA has been till now?

In short, Israel cannot place its ultimate security in the hands of foreign forces, nor in the supposed security to be found in Palestinian demilitarization, nor still in the durability of any demilitarization clauses, however stringent, enshrined in a future peace agreement.

To have negotiations, Palestinian Arab terrorist groups and bomb factories would have to be disbanded and incitement to hatred and murder comprehensively ended for an appreciable period – at least a couple of years.

Of course, only a profound change in Palestinian politics and society, which abandons the goal of building a state upon the grave of Israel, offers the prospect of a new political reality in which such things could conceivably take place. Genuine negotiations can only follow such a change; they cannot precede it.

Morton A Klein is president of the Zionist Organization of America (ZOA). A national Jewish weekly has named him on of the five most influential Jewish leaders in America. Another named him one of the top dozen activists of the past century. Follow him on Twitter @mortonaklein7 and on the web at ZOA.ORG.