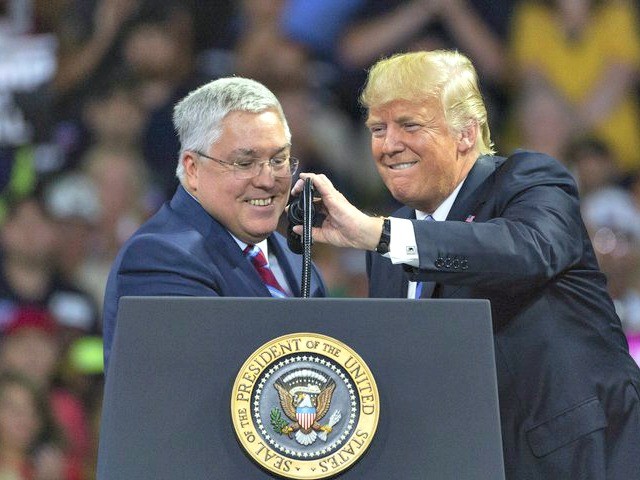 President Donald Trump and Senate candidate Patrick Morrissey rallied West Virginia voters Saturday with the message, a vote for Morrissey is a vote to stand up for “West Virginia values.” Trump added it was also a vote for him, for the Trump agenda, and to make America great again.

Trump introduced Morrissey to the crowd as “somebody that’s gonna give us a vote … every time.”

“For far too long Barack Obama,” Morrissey began, met with boos from the crowd, “Hillary Clinton,” he continued to more boos, “and Washington liberal Joe Manchin,” he said to more boos. “All of these individuals and the coastal elites, they abandoned our WV values, they practiced political correctness, they advanced liberal policies, they didn’t put America first,” he went on. “But fortunately for all of us there was one candidate, one man willing to fight back against political correctness and put America first, Donald J. Trump.”

Morrissey said West Virginia voters have a very big decision to make in this election, “you can go back to the values of those who abandoned West Virginia: Hillary Clinton, Barack Obama, or Joe Manchin, or you can stand with someone who puts you first, American first, and West Virginia first.” The crowd cheered him on.

He called the differences between himself and Manchin “couldn’t be sharper.” He promised to advance the “Trump jobs agenda.” The crowd cheered again.

“A vote for dishonest Washington liberal Joe Manchin, you’re going to be empowering that same group of radical, liberal obstructionists, the one you saw in the senate circus this past week,” he said speaking of the Senate hearings on allegations against Supreme Court nominee Brett Kavanaugh. Morrissey said Manchin abandoned West Virginian’s gun rights, values on life, paychecks affected by the Trump tax cuts, and the people when Manchin supported amnesty and opposed the border wall. Many rally goers held signs reading “finish the wall.”

Morrissey said they are going to ignite the economy even more “We’ll supercharge West Virginia when we make the trump tax cuts permanent.” The crowd erupted in loud cheers. He pledge to install term limits, stop funding of Planned Parenthood, end gun grabs, and stand for the National Anthem.

He appealed to the crowd for help, to volunteer and donate to his campaign.

“This race will likely decide the balance of power in the senate,” said Morrissey. “Those radicals in Washington, Schumer, Pelosi, Maxine Waters, and Joe Manchin…they don’t want to see the president succeed. They want to obstruct just like they did this week against Judge Kavanaugh.” The crowd elicited boos from the crowd.

“Ladies and gentlemen, we must confirm Judge Kavanaugh,” Morrissey said to cheers from the crowd.