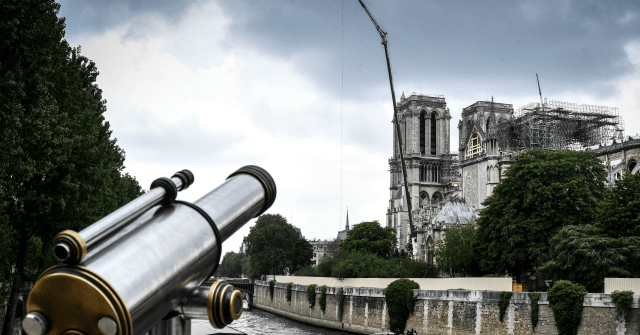 A strengthened industrial glass roof offset by transparent gargoyles, saints, and spire has been proposed for Notre Dame by the architects behind the Apple Store.

The studio, Eight Inc, began working with Apple in 1999 and later built its flagship stores of white and glass spaces from 2001. Now it wants to bring the same concept to the Paris landmark gutted by fire in April.

The concept of strengthened glass as an alternative for roof and associated additions comes after the French senate passed a bill stating Notre Dame must be returned to its “last known visual state.”

The glass roof proposal defies that decree, noting it would include structural glass, rather than standard glass, which the designer contended had an almost “luminous” quality.

French President Emmanuel Macron initially backed an “inventive” new design for the cathedral, however leading architects in charge of the restoration have since said the cathedral should be rebuilt in an identical way and French legislators agree.

This is not the first time architects have rushed to offer their interpretation of how Notre Dame should be restored to its former glory.

Last month Lord Norman Foster unveiled a design topping the ancient cathedral with a glass and steel canopy with a featureless glass and steel spire, which he described as “a work of art about light” which would be “contemporary and very spiritual and capture the confident spirit of the time” in comments to the Times.

Still others feel a nod to Fance’s colonial past would be more appropriate.

Me: Guys they’re not actually going to do a horrible modern redesign of Notre Dame, please get a grip

As Breitbart News reported, perhaps most controversial proposal so far appeared in Domus, the architecture magazine, by Tom Wilkinson. He called for the fallen spire to be replaced with an Islamic minaret, to memorialise Algerians who protested the French government in the 1960s.

“These victims of the state could be memorialised by replacing [the spire] with – why not? – a graceful minaret,” Wilkinson insisted.