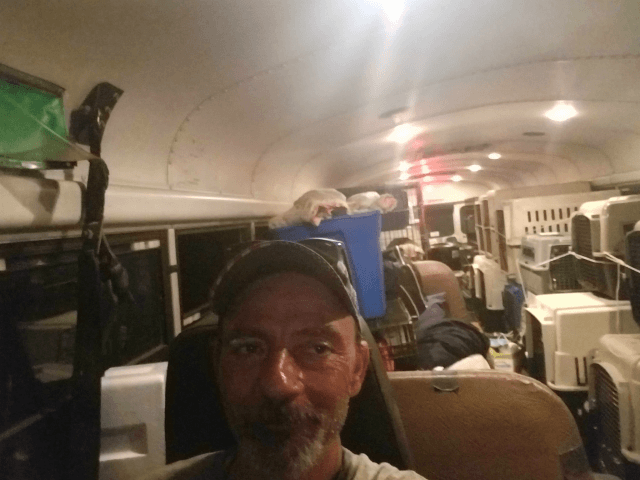 Tony Alsup has spent the last week in a school bus, rescuing dozens of dogs and cats left in the path of the deadly storm.

The bus, emptied seats, and with “EMERGENCY ANIMAL RESCUE SHELTER” emblazoned on its side, has been responsible for saving the lives of 53 dogs and 11 cats from South Carolina animal shelters threatened by Hurricane Florence.

“I’m like, look, these are lives too,” the 51-year-old Greenback, Tennessee trucker told the Washington Post. “Animals  — especially shelter pets — they always have to take the back seat of the bus. But I’ll give them their own bus. If I have to I’ll pay for all the fuel, or even a boat, to get these dogs out of there.”

Saint Frances Animal Center, one of several from which Alsup has rescued numerous animals, sang his praises on Facebook yesterday.

“It’s all true,” they said. “Tony swooped in at 4am Wednesday morning to pick up our ‘leftovers’ – the dogs with blocky heads, the ones with heartworm. The ones no one else will ever take. And he got them to safety. Not the most conventional evacuation, but surely the one with the most heart.”

Many others are joining in support of Alsup’s efforts. “Hats off, sir. There are still heroes among us,” one user said. “What a wonderful man! Gives me hope back for humanity! Thank you so much, sir,” added another.

While most of the pets have been transported ot shelters with room to house them, many have already begun to be adopted, with some users even requesting to know where the ones Alsup is rescuing specifically would be available. All in all, he has not only saved their lives, but is instrumental in offering many of these would-be companions new ones.

Alsup’s mission is ongoing. Today, his goal is to make it through the flooding to Wilmington, N.C. There are animals in desperate need of a ride on Noah’s bus.