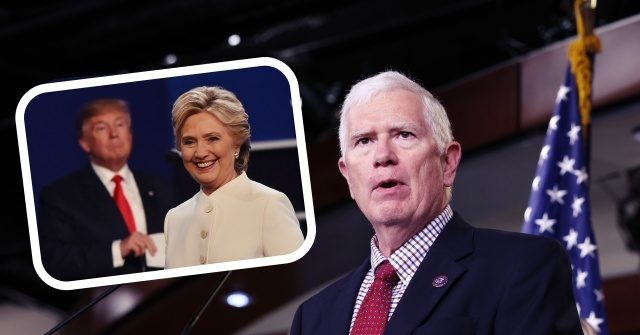 This week, as Breitbart News reported, Special Counsel John Durham filed a motion in federal court accusing Clinton’s political allies of paying a tech contractor to spy on Trump as a candidate for president and as president after the 2016 election.

“Donald Trump was right,” Brooks wrote in a post online. “The Clinton campaign and Big Tech spied on both candidate and President Trump. The American people deserve justice. Someone needs to go to jail.”

Donald Trump was right. The Clinton campaign and Big Tech spied on both candidate and President Trump. The American people deserve justice. Someone needs to go to jail. https://t.co/otJdT1SJP0

The Durham filing alleges that “beginning in approximately July 2016, Tech Executive-1 had worked with the defendant, a U.S. investigative firm retained by Law Firm-1 on behalf of the Clinton Campaign, numerous cyber researchers, and employees at multiple Internet companies to assemble the purported data and white papers.”

“In connection with these efforts, Tech Executive-1 exploited his access to non-public and/or proprietary Internet data … the Government’s evidence at trial will also establish that among the Internet data Tech Executive-1 and his associates exploited was domain name system (“DNS”) Internet traffic pertaining to (i) a particular healthcare provider, (ii) Trump Tower, (iii) Donald Trump’s Central Park West apartment building, and (iv) the Executive Office of the President of the United States (“EOP”),” the filing notes.

Trump has endorsed Brooks in the Alabama Senate race. The Republican primary in the race is on May 24.