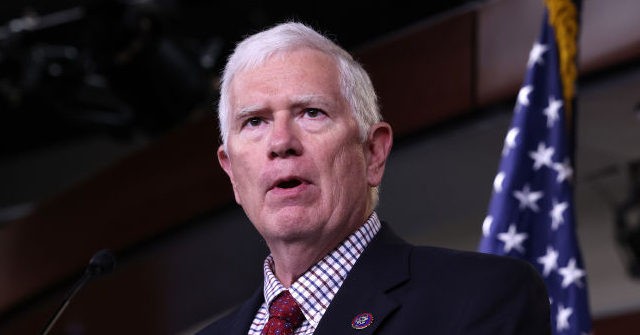 China must “pay restitution” to the Americans it has harmed having “created” and “lied” about COVID-19, charged Rep. Mo Brooks (R-AL), who introduced a bill aimed at procuring compensation funded either willingly by the Chinese Communist Party (CCP) or unwillingly through increased tariffs on Chinese goods.

In a video posted on Twitter on Tuesday, Republican Rep. Mo Brooks of Alabama called for Chinese accountability over the severe harm caused by the coronavirus.

“Communist China should be held financially accountable for damages and injuries caused by COVID-19,” Brooks said. “That is why I’ve introduced the ‘China COVID–19 Restitution Act.’”

The bill, first introduced by Brooks in June, requires the president to impose duties on Chinese manufactured goods and components, with resulting funds providing compensation and reimbursement for COVID-19-related losses.

Brooks, a candidate for U.S. Senate in Alabama, accused China of having engineered the original strain of the now ubiquitous respiratory virus and then having sought to cover it up.

“I am persuaded by the evidence that the Communist Chinese Party created COVID-19 in their Wuhan bioweapons lab,” he said. “Making matters worse, China’s subsequent lies about the contagiousness and lethality of COVID-19 increased tragic loss of life and economic damage to America and Americans.”

“China lied, people died, and China should compensate for the damage done,” he said.

Funds for such compensation, Brooks stated, would come from China, whether willingly or not.

“My bill establishes a COVID-19 restitution trust fund to be funded either by Communist China contributions from the CCP or by money forcibly collected from increased tariffs on Chinese goods,” he said.

According to Brooks, the most populous country should be treated no differently than a domestic enterprise guilty of the same crimes.

“Communist China should be treated exactly as any American company would be treated if it artificially created a virus more deadly and dangerous [than a natural one] and thereafter released it on an unsuspecting world,” he argued.

Brooks concluded by saying he would not allow China to get away with those actions.

“I refuse to sit idly by and watch China get away scot-free,” he said. “My bill holds Communist China accountable — something every American should agree is warranted by the facts.”

Brooks’ remarks come as China continues to deny and evade responsibility for the COVID-19 outbreak.

Last month, Sen. Marco Rubio (R-FL) and more than a dozen other GOP lawmakers introduced a bill that would sanction Beijing for its “continued obstruction of a COVID origins investigation.”

In December, former President Donald Trump argued China should pay reparations for its role in the COVID-19 pandemic.

In addition, Senator Tom Cotton (R-AR) insisted National Institutes of Health (NIH) Director Dr. Francis Collins and National Institute of Allergy and Infectious Diseases (NIAID) director Dr. Anthony Fauci were reluctant to discuss and investigate the possible role the Wuhan Institute of Virology played in the COVID-19 pandemic because they were “responsible” for sending tax dollars to that laboratory.

That same month, when Vice President Kamala Harris was asked about an uptick in U.S. coronavirus cases, she refused to hold China accountable.

“I don’t think this is a moment to talk about fault,” she said. “It is no one’s fault that this virus hit our shores or hit the world.”

“But it is more about individual power and responsibility and the decisions that everyone has the choice to make,” she added.