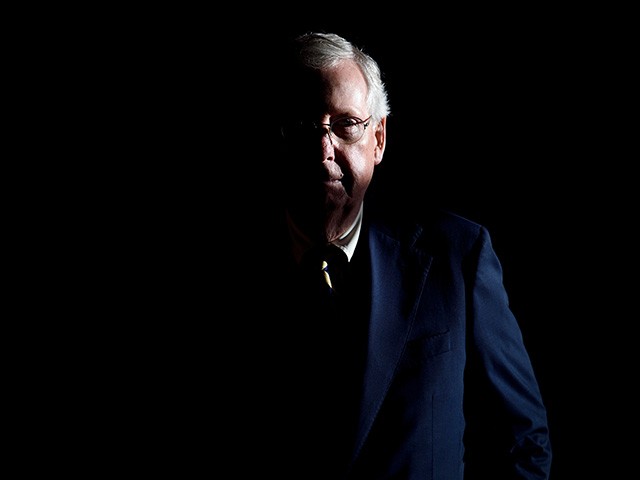 McConnell to anti-Kavanaugh protesters: “There is no chance in the world they’re going to scare us out of doing our duty. I don’t care how many members they chase, how many people they harass here in the halls … we will not be intimated by these people.” pic.twitter.com/JqwhEaWN6h

“Colleagues, including my friend, the Democratic leader, have tried to get Judge Kavanaugh to withdraw from this process because of these uncorroborated and sometimes absolutely ridiculous allegations,” McConnell began. “When that did work, then the far-left tried to bully and intimidate members of this body, Republican United States senators. They’ve tried to bully and intimidate us.”

Without referencing the senator’s name, the Senate Majority Leader lamented how organized far-left protesters recently drove Sen. Ted Cruz (R-TX) and his wife Heidi out of a Washington, D.C.-area eatery, Fiola, over the lawmaker’s support for Kavanaugh.

“One of our colleagues and his family were effectively run out of a restaurant in recent days by these people. And other reported that protesters physically blocked his car door,” McConnell said. “Some have seen other organized far-left protesters camp out at there homes.”

“I want to make one thing perfectly clear. We will not be intimated by these people.”

As the Federal Bureau of Investigation (FBI) winds down its probe into decades-old allegations of sexual misconduct leveled against Kavanaugh, Republican leadership is said to be planning on bringing the Supreme Court nominee’s confirmation to the full Senate to vote next week. As Breitbart News reported, Sens. Lisa Murkowski (R-AK), Jeff Flake (R-AZ), and Susan Collins (R-ME), three Republican key swing votes, have yet to decide if they will support his confirmation.