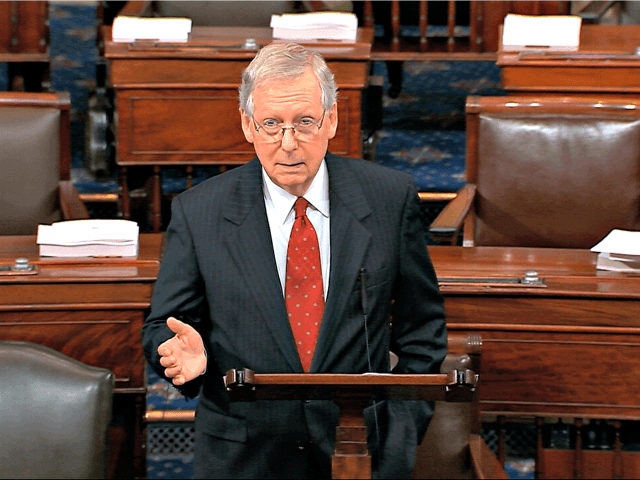 Senate Majority Leader Mitch McConnell urged his colleagues to rise above the dirty political smears of Judge Brett Kavanaugh and vote to confirm him.

“We’ll either state that facts and evidence can simply be brushed aside when politically inconvenient and signal that media bullying and mob intimidation are valid tactics for shaping the Senate. The mob can attack and the Senate caves,” he said. “Or we’ll stand up and say that serious, thoughtful, fact-based deliberation will still define this body.”

The Senate majority leader made his remarks on the Senate floor ahead of the cloture vote on Friday morning. The vote passed 51-49.

McConnell urged Senators to focus on fact-based evidence instead of uncorroborated allegations, reminding them of the “pivotal day” in the Senate.

“The ideals of justice that have served our nation so well, for so long, are on full display,” he said.

McConnell reviewed the left-wing process of the Kavanaugh accusations, calling them “disgraceful.” He slammed the Senate for focusing on Kavanaugh’s “goofy jokes” in a yearbook and his beer-drinking days in high school and college.

“This is our approach to confirming a Supreme Court Justice? This is the Senate’s contribution to public discourse?” McConnell asked in disbelief.

He pointed to all of the accusers who recanted their accusations, despite the “Keystone cops” trying to dig up more mud on Kavanaugh.

The final confirmation vote will be held on Saturday.