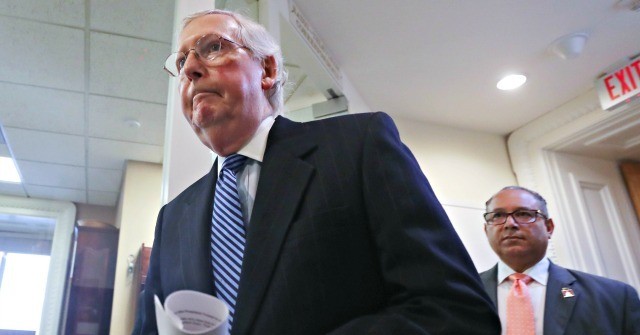 The Senate voted to acquit President Trump of the two articles of impeachment filed against the president. Romney was the lone Senate Republican to vote to convict Trump.

A reporter asked McConnell after the impeachment vote whether there was any chance Romney could be expelled from the party because of his vote to convict the president.

McConnell did not rule out that Romney could be expelled. The Kentucky Republican said, “I was surprised and disappointed, but we have much work to do for the American people, and I think Senator Romney has been largely supportive of most [sic] everything we tried to accomplish.”

Other Senate Republicans sharply disagreed with Romney’s decision to vote to convict the president.

Sen. Steve Daines (R-MY) told reporters on Wednesday, “I strongly disagree with his position, but he has to speak for what he believes and I’ll speak for what I believe.”

Sen. Josh Hawley (R-MO) said that he was “surprised” and disappointed to see Romney vote to convict Trump.

GOP Sen. Josh Hawley told me he’s “surprised” and disappointed with Romney decision – a line that will be echoed by many Senate Republicans today

Sen. Rick Scott (R-FL) told Fox News on Wednesday that Romney “bought into Adam Schiff’s [D-CA] impeachment charade” and that the people of Utah will judge him for his vote to convict the president.

Senator Romney is wrong. His decision to buy into Adam Schiff’s partisan charade is disappointing. And he will ultimately be judged by the voters of Utah.