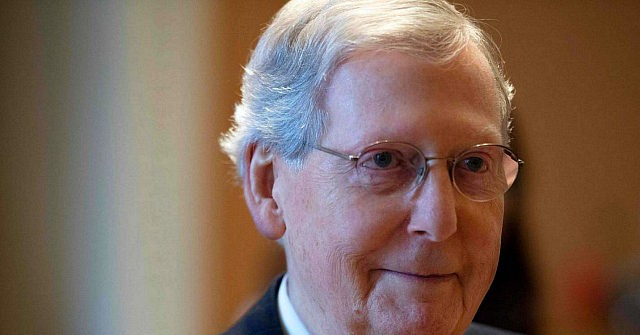 Senate Majority Leader Mitch McConnell (R-KY) on Monday called on Democrats to accept the outcome of Special Counsel Robert Mueller’s investigation and to stop trying to relitigate the 2016 election.

“Yesterday, Attorney General [William] Barr transmitted to Congress his summary of the Special Counsel’s principal conclusions from his investigation into Russia’s efforts to interfere in the 2016 election. The result of that investigation is being hailed as good news for the president. It certainly is that. But really, it is good news for the country,” he said in a speech on the Senate floor.

“[T]he American people hired this president to clean up the mess of the preceding eight years. That’s exactly what we’ve set about doing. And the results are clear. The nation is clearly better off than it was two years ago,” he said in a Senate floor speech.

“So I sincerely hope that now, at last, our friends on the left will be able to put aside their fixation on permanently re-litigating their loss in 2016 and actually join in the productive work that the rest of us have been proudly engaged in for two years and counting,” he said.

“Two years, thousands of subpoenas, hundreds of search warrants, hundreds of witnesses, millions of taxpayer dollars, and these are the findings, madam president. No collusion, no conspiracy, no obstruction.” –@senatemajldr pic.twitter.com/KqOMCeMD5H

Barr announced Sunday in a letter to leaders of the House and Senate Judiciary Committees that Mueller found that there was no collusion, conspiracy, or coordination by anyone on the Trump campaign with Russia. Barr said Mueller did not take any judgment on whether the president obstructed justice and that he and Deputy Attorney General Rod Rosenstein concluded that the evidence on obstruction was not sufficient for a criminal offense.

McConnell took a swipe at Democrat colleagues for “spinning intricate theories” and trying to “sell the American people on their wild claims.”

“So like I said, in any sane political moment, all of this would be very welcome news to all Americans. But we all know that, amazingly, the reaction in some corners of the far left has seemed not to be celebration, but rather, disappointment. Huge components of the Democratic Party and their media allies have spent years spinning intricate theories about this presidency and trying to sell the American people on their wild claims,” he said.

It’s as if many of our Democratic colleagues are still just unable to process the simple fact that, yes, the American people elected this Republican president over his Democratic opponent. We are faced with new evidence every day that our Republican policies are delivering exactly the change that middle-class families voted for in 2016. Yet even still, many on the left remain convinced that only conspiracy and corruption could possibly explain why they might actually lose an election.

“So, two years, thousands of subpoenas, hundreds of search warrants, hundreds of witnesses, millions of taxpayer dollars, and these are the findings: No collusion. No conspiracy. No obstruction,” McConnell said.

He said, however, the investigation did produce a deep examination of Russia’s efforts to interfere in the election via an online disinformation campaign and computer hacking efforts designed to sow discord in the U.S., and he slammed the Obama administration for not doing enough about it.

“It is deeply disturbing that the Obama administration was apparently insufficiently prepared to anticipate and counter these Russian threats. It was hardly a secret prior to November 2016 that Putin’s Russia was not and is not our friend. And yet, for years, the previous administration ignored, excused, and failed to confront Putin’s malign activities at home and abroad,” McConnell said.