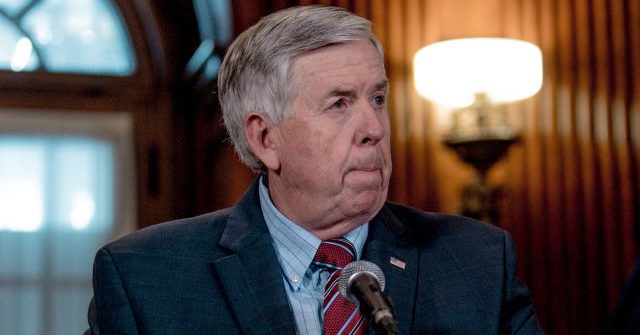 Parson’s communications director, Kelli Jones, tweeted a threatening message to the Republican-controlled legislature that is internally debating whether to give Pelosi an extra House district to flaunt in the midterms. Establishment state Republican senators have filibustered the GOP favorable maps since Tuesday.

Republicans have proposed drawing a 7-1 favorable map for the GOP, while establishment Republicans would prefer to draw favorable 6-2 maps that would benefit Democrats. Crawford’s excuse for blocking her fellow Republicans is that the 7-1 map would hurt rural communities.

“Voting for a 7-1 map doesn’t get you to heaven,” Crawford said on the Senate floor:

She said Republicans are talking about strong 6-2 maps, not a 7-1 that would hurt rural communities. #moleg

Crawford is not the only Republican blocking the Republican’s 7-1 map. “Fourteen Republicans, including Senate leadership, joined 10 Democrats in rejecting the proposal, with members of the Conservative Caucus and Sen. Paul Wieland, R-Imperial, voting in favor,” according to the Missouri Independent.

The establishment media has picked up on the Republican’s knock-kneed effort to help Pelosi maintain the gavel. “Notable jab from MO Gov. Mike Parson’s (R) communications director against a group of hard-line conservative state senators filibustering in favor of a 7R-1D gerrymander (instead of the 6R-2D status quo map that the state House passed),” David Wasserman, senior editor of the Cook Political Report, tweeted.

Establishment Republicans in Missouri may be influenced by Barack Obama’s former attorney general, Eric Holder, who has successfully defeated Republican state lawmakers in the court system. According to the Wall Street Journal, Holder’s success is a result of his “sue to blue” strategy, which he implemented after Obama took devastating losses in the 2010 redistricting cycle. About 75 congressional districts in seven states will be settled in the Courts nationwide, Politico reported.