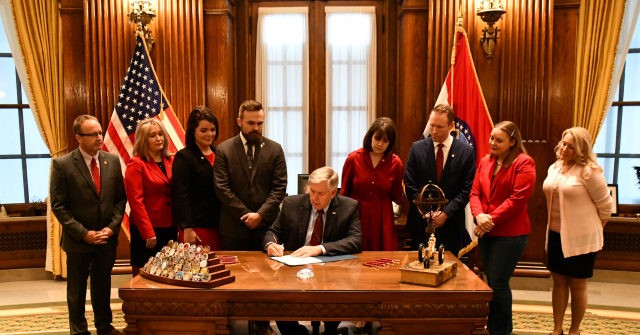 Missouri Gov. Mike Parson signed an abortion bill into law Friday, banning the procedure at eight weeks of pregnancy and asserting that the state is a “sanctuary of life.”

By signing House Bill 126 today, we are sending a strong signal to the nation that, in Missouri, we stand for life, protect women’s health, and advocate for the unborn.

All life has value and is worth protecting.

The law – the Missouri Stands for the Unborn Act – is considered one of the most comprehensive pieces of pro-life legislation in the country. It makes an exception for a medical emergency but not for rape or incest.

“By signing this bill today, we are sending a strong signal to the nation that, in Missouri, we stand for life, protect women’s health, and advocate for the unborn,” said the Republican governor. “All life has value and is worth protecting.”

The law recognizes that “God is the author of life” and declares that Missouri “and all of its political subdivisions are a ‘sanctuary of life’ that protects pregnant women and their unborn children.”

The law also prohibits an individual from performing or inducing an abortion on the basis of a prenatal diagnosis of potential for Down syndrome or because of the race or sex of the unborn child.

Additionally, the law “contains an emergency clause that requires written notification of a parent or guardian by the custodial parent or guardian of consent for an abortion to be performed on a minor,” states the governor’s office.

The law also “expands the definition of a pregnancy resource center for tax credit purposes to include facilities that provide assistance to families as well.”

Abortionists who defy the law could face 5 to 15 years in prison. Women who choose to have an abortion after the eight-week period would not be prosecuted under the law.

“Every child has an intrinsic value given to them by the Creator of life,” Missouri House Speaker Elijah Haahr said in a statement following the final approval of the bill. “The bold legislation we sent to the Governor’s desk is the strongest and most comprehensive pro-life bill in the country.”

Referring to states such as New York, Virginia, and Vermont – which have put forward bills that allow abortion at any time up until birth – Haahr said, “While the actions of some states this year said life is insignificant, the Missouri House made the statement that in Missouri, we believe an unborn child is a human life worth protecting.”

Missouri Rep. Nicholas B. Schroer, who sponsored the legislation, said its purpose was not to provoke a court challenge.

He said, “This legislation has one goal, and that is to save lives … to withstand judicial challenges and not cause them,” NBC News reported.

“While others are zeroing in on ways to overturn Roe v. Wade and navigate the courts as quickly as possible, that is not our goal. However, if and when that fight comes we will be fully ready.”

He has put the health & lives of Missouri women at risk in his race to make our state the one that overturns #RoevWade at the Supreme Court.#StopTheBans #MoLeg https://t.co/IhI1GsxDcK

According to the law, if Roe v. Wade were to be overturned, Missouri’s measure includes a complete ban on abortions except in cases of medical emergencies.

The legislation also contains contingency plans if the courts block the proposed eight-week ban, including a range of bans from 14-20 weeks of pregnancy.