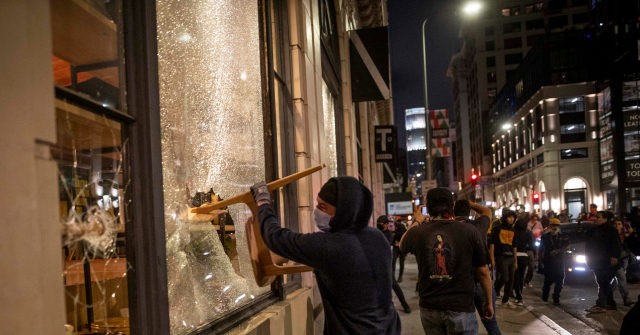 As criticism mounted following one of the most destructive nights in Minneapolis history, the governor vowed to restore order over the weekend, according to the Star Tribune.

Walz “acknowledged shortcomings in the response to protests late Thursday night and early Friday, which led to the evacuation and destruction of the city’s Third Precinct headquarters, as well as widespread looting and arson fires that set the city ablaze,” the article read.

Police officers were “overwhelmed” by the protests and violence across the city, said Minneapolis Police Chief Medaria Arradondo.

“We have never in my 30 years experienced multiple events of high-risk civil unrest, that included mass looting, indiscriminate arson with sounds of … gunshots, direct violence in confrontations with police, and all of these happening throughout our entire city,” he noted.

To quell the violent protests, the governor should have immediately called in the National Guard and implemented a curfew on Thursday instead of waiting for city leaders to ask for help, said GOP Senate Majority Leader Paul Gazelka.

“Above all else, this is a failure in leadership, and that leadership rests on Gov. Walz’s shoulders. The governor cannot blame the mayors of Minneapolis and St. Paul,” he stated.

“It was obvious that the Minneapolis mayor was in over his head. And I think that’s where the governor needed to respond with emergency powers and commander-in-chief over our National Guard — the National Guard was simply waiting for a plan of action,” he concluded.

However, Walz took responsibility at a press conference Saturday “for underestimating the wanton destruction and the size of this crowd,” according to Breitbart News.

We have deployed a force, that, I think, as we sat down together and talked about, would have, in any other civilian police operation, worked. But the terrifying thing is to hear people who have seen this, and myself looking at this, it resembles more of a military operation at times now, as, especially, ringleaders moving from place to place.

Walz also said that despite the “largest civilian deployment” in state history, law enforcement lacked the numbers to respond to the riots.

“We cannot arrest people when we’re trying to hold ground because of the sheer size, the dynamics, and the wanton violence that’s coming out there,” he explained.

Also on Saturday, the governor announced the “full mobilization” of the Minnesota National Guard, which said it was prepared to restore the state’s order:

Minnesota @GovTimWalz has announced the full mobilization of the @MNNationalGuard for the first time since World War II. We are “all-in” to restore order and maintain and keep the peace in Minnesota.