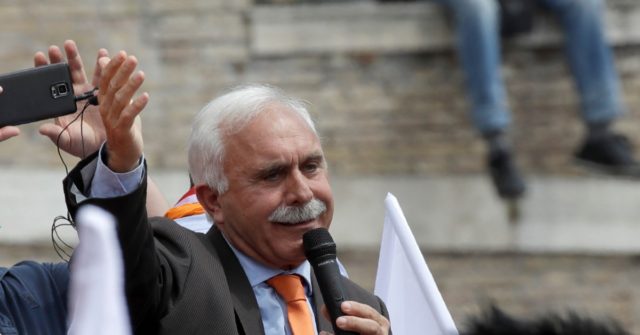 ROME — The controversial Sicilian General Antonio Pappalardo has proposed building a bridge spanning the Strait of Sicily to join the Italian island to north Africa.

The 73-year-old former brigadier general suggested at a rally of antiestablishment Orange Vests this weekend the bridge could begin in the Sicilian town of Mazara and stretch across to Tunisia, a distance of some 150 kilometers (94 miles).

Pappalardo clarified that his proposal was not meant to stoke Italy’s immigration problem, insisting that “only a select group of migrants will be permitted to arrive.” Rather, he said, the bridge would force anyone wishing to drive to Africa to pass through Sicily.

The longest bridge in the world is the Danyang–Kunshan Grand Bridge in China, part of the Beijing-Shanghai High-Speed Railway. The bridge, which opened in June 2011, spans 165 kilometers (102.4 miles).

The Orange Vests staged a series of protests in late May and early June demanding the resignation of Italian Prime Minister Giuseppe Conte over the ongoing coronavirus lockdowns.

“The pandemic does not exist, it’s total bullshit,” Pappalardo told a rally in Bari on May 31, according to the Italian news agency ANSA. “The coronavirus is not lethal, it only kills already sick people over 80. Enough with the lies and falsehoods, you have terrified the Italian people.”

Pappalardo has also called for Italy to exit the EU and to resume printing its own currency, the lira.