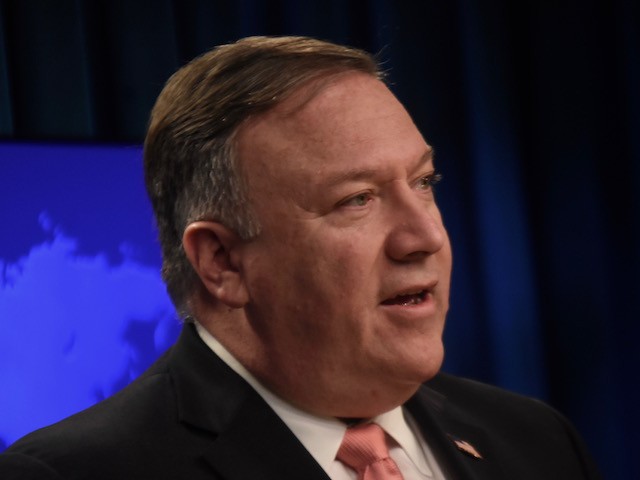 The missile could reach parts of Europe and anywhere in the Middle East, Pompeo said, and noted that the test was in violation of United Nations Security Council Resolution 2231, part of the 2015 nuclear deal that calls on Iran to stop pursuing “any activity related to ballistic missiles designed to be capable of delivering nuclear weapons, including launches using such ballistic missile technology.”

“As we have been warning for some time, Iran’s missile testing and missile proliferation is growing. We are accumulating risk of escalation in the region if we fail to restore deterrence,” Pompeo said.

“We condemn these activities,” Pompeo added, “and call upon Iran to cease immediately all activities relating to ballistic missiles designed to be capable of delivering nuclear weapons.”

The Iranian regime has just test-fired a medium range ballistic missile that’s capable of carrying multiple warheads. This test violates UNSCR 2231. Iran’s missile testing & missile proliferation is growing. We condemn this act and call upon Iran to cease these activities.

In a veiled threat, Amirali Hajizadeh, the head of the air division for Iran’s Islamic Revolutionary Guards Corps, said last week that Iran’s missile arsenal could reach US bases in Qatar, the UAE and Afghanistan in addition to US aircraft carriers stationed in the Persian Gulf.

“They are within our reach and we can hit them if the [Americans] make a move,” he was quoted by Reuters as saying.

On Sunday, Iranian Foreign Ministry spokesman Bahram Qasemi stopped short of confirming the missile test but responded to Pompeo’s statement by claiming that his country’s missile program did not violate any UN resolutions.

“Iran’s missile program is defensive in nature. … There is no Security Council resolution prohibiting the missile program and missile tests by Iran,” state news agency IRNA quoted Qasemi as saying.

The U.S. and other Western officials have dismissed Tehran’s claims that the ballistic missile program is defensive in nature. Earlier this year, Israeli Prime Minister Benjamin Netanyahu presented a massive trove of documents smuggled out of Iran by the Mossad that he said was conclusive evidence of Tehran’s nuclear aspirations.