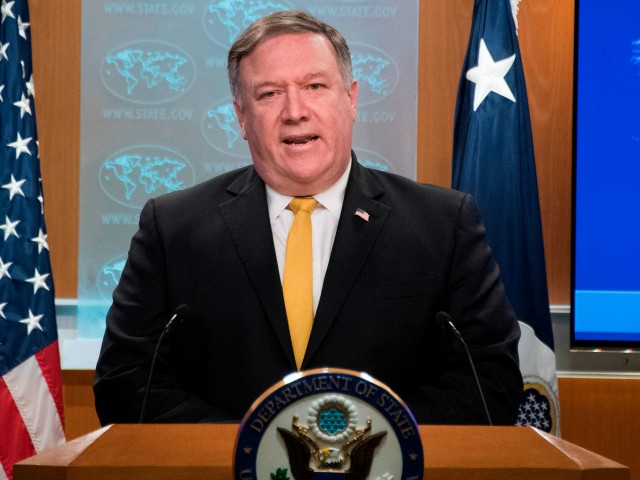 Secretary of State Mike Pompeo blasted Senate Democrats on Wednesday for refusing to confirm more than 65 of President Donald Trump’s nominees for senior positions at the State Department.

“There are 65 nominees now sitting with the United States Senate. That’s over a quarter of all the senior level confirmable positions that the United States Department of State is tasked with using to achieve its diplomatic outcomes,” he said at a press conference.

“And I want every single American to know that what Sen. Menendez and members of the Senate are doing to hold back American diplomacy rests squarely on their shoulders.”

Pompeo said during his confirmation hearing that Menendez had told him that “the problem is that we have an emaciated State Department under this administration.”

“Well, we’ve now done our part to fix that,” Pompeo said. “He now needs to do his, and the Senate needs to do its part. These candidates are quality candidates. They are not sitting on the Senate floor because of objections with respect to their quality or professionalism or their excellence and their ability to deliver American foreign policy.”

Pompeo’s predecessor was notoriously slow in nominating candidates for senior positions during his tenure, something Pompeo has been trying to fix.

In the meantime, a cadre of anonymous State Department civil servants and Obama loyalists have been seeking to undermine the few top-level Trump appointees there through leaks, and Democrat lawmakers have assisted in calling for investigations on them.

The attacks have been primarily focused on one senior-level Trump appointee, Mari Stull, a senior adviser at the Bureau of International Organization Affairs since her appointment in April.

The bureau, led by Trump appointee Amb. Kevin Moley, has been actively implementing President Trump’s policies, and Moley and Stull have both come under increasing attacks. They are the only two Trump appointees in a bureau of about 500 employees.

“Wave after wave of these extremely qualified nominees have been sent to the United States Senate,” he said, giving several examples:

John Richman, he’s been stuck for 85 days while we try to make necessary progress on combating human trafficking — a priority for this administration, and a shared priority of Sen. Menendez.

We have Kim Breier, the president’s nominee to head up Western Hemisphere Affairs stuck for 204 days while the crisis in Venezuela and Central America continues to rage.

David Schenker, the president’s nominee to lead the Bureau of Near East Affairs is held up while the humanitarian crisis continues and while Iran continues to undermine peace and stability throughout the Middle East.

Russia is seeking to prey on our elections but Ellen McCarthy — a 30-year veteran of the intelligence community and the president’s choice to head the Bureau of Intelligence and Research sits on the Senate floor.

As American forces are engaged against terrorists around the world, Clark Cooper, an experienced military professional designated to lead the bureau of Political-Military Affairs waits for the Foreign Relations Committee to act on his nomination.

Pompeo said as a former member of Congress, he appreciates the Senate’s advise and consent role, their duty to conduct oversight, and understands the need to be “fair and honest brokers.”

“But that’s not what is being engaged in. We need these people. What’s happening is unprecedented,” he said, adding, “We have members of the United States Senate for whom partisanship has now driven delay and obstruction of getting America’s diplomatic corps into every corner of the world.”

“It will impact our operations, our ability. We don’t have [an] under secretary for management now–coming on two years with no one filling that position–and enormous complex operations keeping our diplomats safe around the world don’t have a senior leader to manage those operations,” he said.

“There are real, direct impacts of not having these people confirmed, and I implore the United States Senate to take these quality, talented people and allow them to do what it is they have agreed to do on behalf of the United States.”