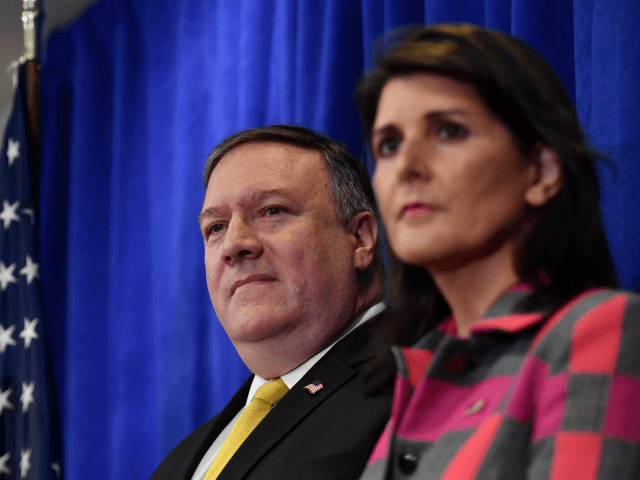 Secretary of State Mike Pompeo ridiculed a question Monday about whether the cabinet ever had 25th Amendment conversations about removing President Donald Trump from office.

“I find the question ludicrous,” Pompeo said. “I’ve never heard anyone talk about it, whisper about it, joke about it in any way. I’ve been in a lot of meetings with a lot of senior officials from this government.”

CNN’s Jim Acosta questioned UN Ambassador Nikki Haley if the conversations had ever taken place, mistakenly calling her the “only person here” at the press conference that had been in the Trump administration from the beginning.

Pompeo corrected Acosta, reminding him that he started in the administration as the CIA director.

“You can now report that there are two senior administration officials that said that your statement is ludicrous,” he said.

“Literally, I’ve never once been in the White House where that conversation has happened,” she said. “I am not aware of any cabinet members that are even talking about that, it is completely and totally absurd.”

The New York Times reported on Friday that Deputy Attorney General Rod Rosenstein talked about using the 25th Amendment to remove Trump from office and secretly taping him in the West Wing.

“No one is questioning the president at all,” Haley continued. “If anything we’re trying to keep up the pace with him.”