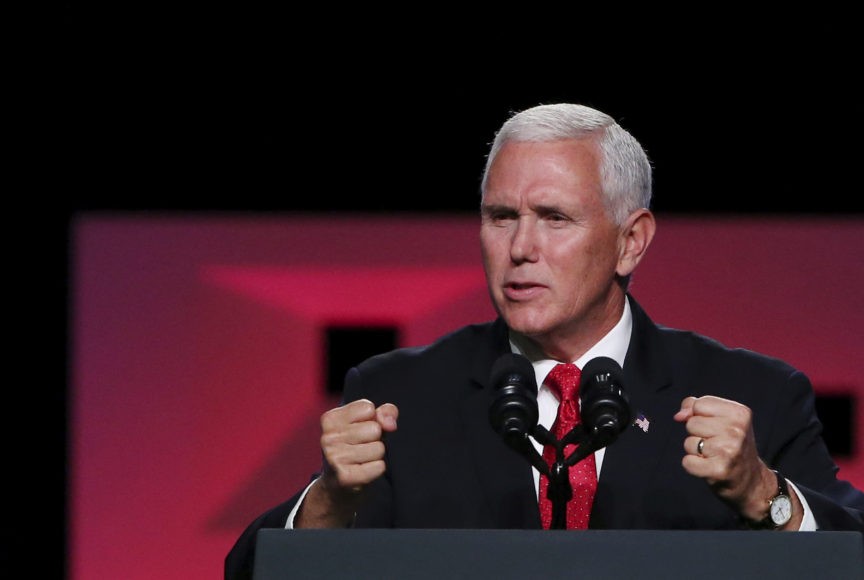 Vice President Mike Pence made the case on election day that voters must choose between the results brought about by President Trump and Republicans, or those who will reverse that progress.

“The American economy is booming after only two years under our administration. This happened because of the president’s leadership and support from Republicans in Congress,” wrote Pence in an op-ed published by USA Today. “Tuesday, we’re counting on the American people to re-elect Republicans to deliver even more results.”

“After a 10-year lapse, America is the world’s most competitive economy once again,” wrote Pence, crediting “sound policy and strong Republican leadership in the White House and Congress.” He pointed also to regulatory relief, tax cuts, and newly forged trade deals.

“While Republicans have delivered results, Democrats have chosen a one-word agenda: Resist,” Pence went on. “That party wants to roll back the progress we’ve made over the past two years.” He argued for voters to keep Republicans in control of congress, “As the Democrats proved the last time they ran Congress, their agenda meant fewer jobs, lower wages, slower growth, and less opportunity for hardworking Americans.”

He said Democrats are more liberal and dangerous than ever, “They want massive tax hikes, weaker borders, and a complete government takeover of health care that would hurt our families and seniors.”

Democrat legislators have voiced intentions to launch impeachment actions against president Trump should they take back control. Rep. Adam Schiff announced that investigation into Russia collision will be a top priority if Democrats retake control. Rep. Maxine Waters vowed retribution if Democrats take the House. House Minority Leader Nancy Pelosi has her sights laser-set on retaking the Speaker’s seat.

“Our progress could end at the ballot box in November 2018,” Pence said citing the boom since 2016. “After two years of accomplishment, the choice in this election is between results or resistance. President Trump and I urge the American people to re-elect Republican majorities to Congress to deliver more results. Imagine where we’ll be two years from now.”