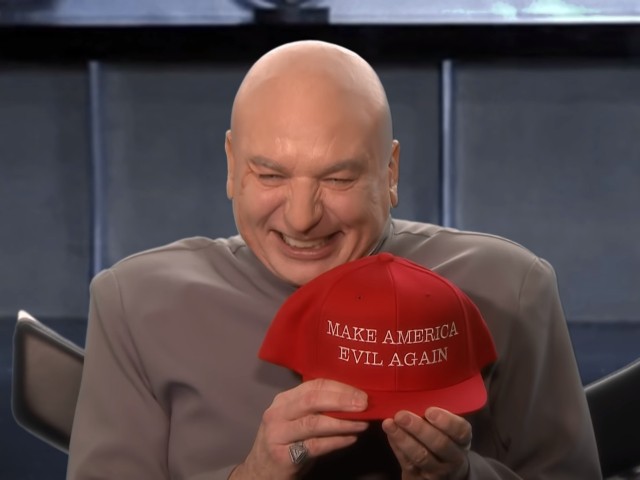 The character’s “five-point evil plan” included increasing YouTube ads, promoting Donald Trump Jr. – who he compared to “the Pillsbury Doughboy” – to Secretary of the Treasury, make “Screamin’ Dill Pickle” the only flavor of Pringles, legalize weed, and change the national anthem to the “Baby Shark Dance.”

Mockingly calling himself the “white Cory Booker,” Dr. Evil said this was the perfect time for his candidacy. “Haven’t you been following the news? It’s 2018,” he said. “Evil’s ‘in’ right now. It’s ‘hip.’ It’s like playing Fortnite while slamming a Tide Pod and doing the Shiggy Challenge.”

Myers also slammed Supreme Court Justice Brett Kavanaugh, saying that while Dr. Evil originally wanted the position, “Trump said [he] was too even-tempered for that.” Still, the character maintained that he was not running as either Democrat or Republican, but rather an “Evil-tarian.” He proclaimed that “our ultimate goal is to Make America Evil Again.”

This is not the first time Myers has used Dr. Evil to skewer Trump and his allies. In April, he appeared on Fallon with a bit about being fired from Trump’s administration after being beaten for “Secretary of Evil” by former White House Chief Strategist Steve Bannon. He took credit for all of the “most evil ideas,” except for deporting Dreamers. “No, Jimmy, even I have my limits,” he said. “I’m evil, but I’m not a monster.”