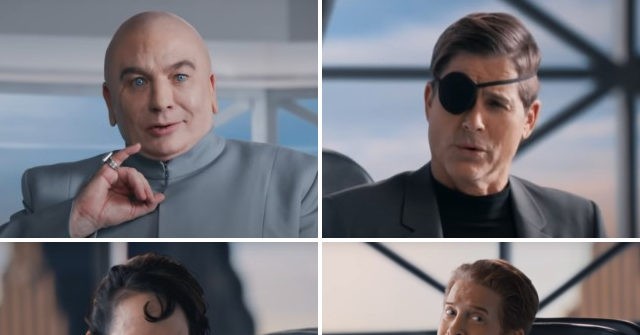 Actor and producer Mike Myers has brought back his Austin Powers villains to stump for climate change and electric cars in an ad for General Motors that is set to air during the Super Bowl this month.

The ad opens with Dr. Evil and crew taking over GM’s headquarters in Detroit as one more step in Evil’s plan to take over the world.

The ad ultimately moves on to showcase GM’s line of electric cars as the Evil crew makes ready to drive off in EVs to rule the world.

The ad is part of GM’s “Everybody In” ad campaign aimed at hawking its line of electric vehicles, including 30 new EVs that will be on sale by 2025.

“We still need to continue work on that idea of normalizing EVs and help Americans across the country actually see themselves in one,” GM Chief Marketing Officer Deborah Wahl recently told the media. “This is really a core part of our entire business strategy at General Motors. We’ll have an EV for every price point and lifestyle.”