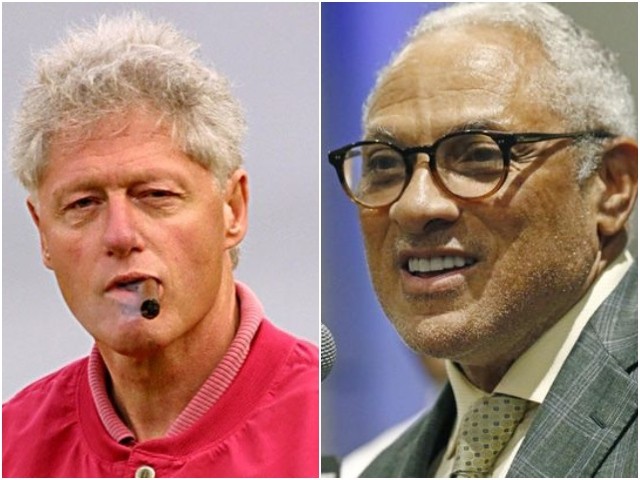 The issue had threatened to derail Clinton’s presidential campaign.

In a lengthy dialogue on May 15, 2006 that was part of the “Presidential Oral Histories” project at the Miller Center of Public Affairs, Espy recalled helping Clinton turn out a big crowd in traditionally conservative Mississippi less than 48 hours after Clinton, joined by his wife Hillary, infamously took to 60 Minutes on January 26, 1992 to deny an extramarital relationship with Flowers.

Later, in a 1998 deposition, Clinton admitted to having a sexual encounter with Flowers.

Flowers says she had a 12-year affair with Clinton, and previously told this reporter that Hillary Clinton was aware of the alleged affair for much of that time. Flowers also said that Clinton personally paid $200 for her to have an abortion in 1977.

In 1992, then-congressman Espy served as co-chairman of Clinton’s state campaign in Mississippi. Espy would later serve as Clinton’s Secretary of Agriculture from 1993-1994.

More than a decade before the #MeToo movement, Espy described to the Miller Center how he helped Clinton get past the controversy around Flowers.

And I think the 60 Minutes piece where the adultery allegations were coming out and Hillary defended him. They did such a good job, I think people began to say: This guy is a good crisis manager; his wife is extremely bright; she’s on his side. They thought it out, and he survived it. If he survives this, it may get worse, but we’ve seen his political skills, and he could survive that. I think people began to say: This guy’s serious, and they began to trickle on in. I think it was the Gennifer Flowers — You know, he came to Mississippi the next day. Did you know that?

Yes, after the Gennifer Flowers — after the Steve Kroft 60 Minutes interview, that’s all I know. His campaign before that seemed to be sinking. He came to Mississippi the next day. What I’m told is that his senior campaign people discouraged him from coming to Mississippi after that, because he needed to go somewhere else with a much higher media market, somewhere like New York, with a high media exposure. He needed to have somewhere he would be guaranteed to have a boost. In Mississippi, a state that was going to vote Republican, he would not be seen as getting that boost he needed to overcome the quasi-scandal, and the attempt to overcome the scandal. He needed to go somewhere else. Mississippi was about the last place he needed to come, but he told them he was coming anyway.

We worked very hard here. I’m not saying I did, but I did along with the committee. We worked very hard to give him that boost he needed, and enough numbers to where the media would understand that in the most conservative state, the reddest state in the nation, this guy had a humongous turnout, and was treated as a celebrity. That’s what we did. We knew he needed it then, and worked very hard to get people in one room. He came in, and when he saw the crowd, I could tell he was very appreciative. His voice level rose, and his spirit rose, and you could just tell. In fact, I introduced him, right after, and I made mention of what happened the night before. I think he remembered that.

On January 28, 1992 Clinton indeed campaigned in Jackson, Mississippi at an event arranged in part by Espy that was kicked off with a prayer for Clinton’s campaign issued by a local pastor. “May we concentrate on winning races, not ruining lives,” stated Rev. Jerry Young at a breakfast event.

Speaking from the Mississippi event, Espy himself was quoted that day in the New York Times saying of the affair reports: “I don’t think that the problems he is having really hurt him that much.”

“There has been some degree of impact, but I think it will be overcome by those people who are willing to listen to his message,” Espy added.

One day before Espy helped to arrange the warm welcome for Clinton in Mississippi, Flowers held a press conference where she played excerpts from tape recordings she had made of private phone calls with Clinton. This after Clinton branded her a liar on 60 Minutes.

Flowers never sought to go public. Her name was revealed against her will when former Clinton insider Larry Nichols, who claimed he was improperly dismissed by Clinton from a state job, mentioned Flowers in court documents. In a lawsuit, Nichols alleged that Clinton diverted state funds to engage in extramarital affairs with five women. He named Flowers and four others, including former Miss America Elizabeth Ward Gracen and former Miss Arkansas Lencola Sullivan.

Nichols would later drop his lawsuit, but the charges helped form the basis for tabloid stories alleging that Clinton had extramarital affairs, including with Flowers.

Three days after Star Magazine mentioned Flowers as Clinton’s alleged mistress, Bill and Hillary Clinton infamously appeared side by side on 60 Minutes, where Bill denied the relationship with Flowers.