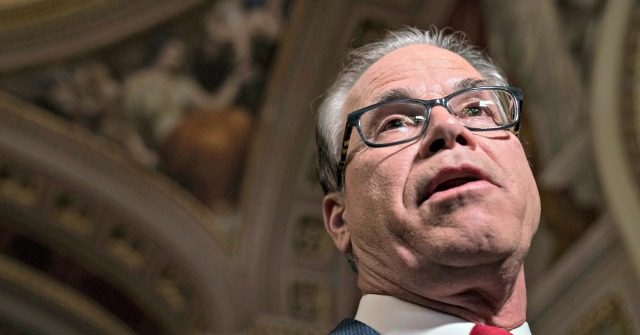 Sen. Mike Braun (R-IN) told Breitbart News during a press conference on Wednesday that the death of George Floyd has resulted in a “watershed moment” to reform law enforcement procedures.

The death of Floyd sparked two weeks of protests and pushed Democrats, such as Sens. Kamala Harris (D-CA) and Cory Booker (D-NJ), to sponsor their own police reform legislation.

Sen. Tim Scott (R-SC), along with Braun, are working to develop their own proposal, known as the JUSTICE Act, which would address police reporting, accountability, training, and relations.

The JUSTICE Act would include increased funding for body cameras, tie grant funding to law enforcement agencies to training on deescalation tactics, and require states to maintain a system for sharing records of law enforcement officers.

Braun has argued that Republicans sit idly by on the law enforcement issue. The Hoosier senator has long contended that Republicans should lead on topical issues such as the environment and health care, or else they will face dire consequences, and Democrats will enact their more radical proposals.

Braun said during the press conference that progressive solutions to police reform such as “defunding police departments and some of the other craziness, I think that’s analogous to the Green New Deal; those ideas don’t make sense. It is incumbent on Republicans because we’ve always been defenders of law enforcement to try to improve it. If we don’t come up with something that makes sense, we will be held accountable for it.”

He continued, “When you come to a watershed moment like this, I think it’s best to look at things deeply, broadly, and try to fix it. And I think for our own conference, it’ll be a set of proposals that may not go far enough. When you look at the Booker-Harris bill, they may be doing some things a step too far.”

“So, I believe when you arrive at a moment like this, the case is on the side of fixing it comprehensively, and not throwing the baby with the bathwater in the sense of defunding police departments, which is one of the silliest ideas I’ve ever heard,” Braun added.

Braun said that Republicans need to do something “that’s more than window-dressing.”

“What we’re going to do as a Republican conference, I hope, is something that is going to be significant,” the Hoosier senator said.