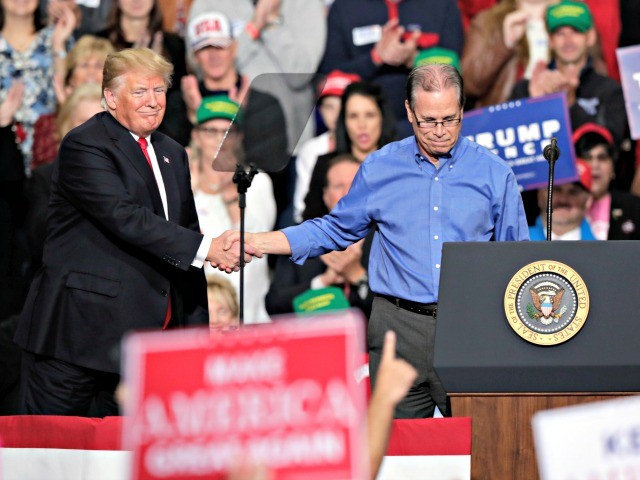 “Never in my life did I think that I would be on the stage with the President of the United States, the VP, and Bobby Knight,” Braun said in awe as he stood on a stage surrounded by 8,500 cheering people packing out the rally stadium. “How could it get any better?…Only in America. Only in Indiana.”

“When I decided to do this 14-and-a-half months ago, I never would have done it, would not have wasted my time if this man did not do what he did,” Braun said pointing to President Trump. He recalled November 8, 2016, going to sleep late and waking up the next morning, “I’ll never forget getting up that next morning…turning on the tv….seeing president-elect Trump.”

“That’s the reason I’m here,” he reaffirmed. “If it hadn’t happened, I would have been hunkered down in southern Indiana wondering how to survive.”

Braun said his opponent, incumbent Democrat Sen. Joe Donnelly, “takes all his marching orders from Sen. Chuck Schumer.” He then called on the crowd to “retire Joe Donnelly.”

Trump lauded Braun at the rally as a patriot, fighter, winner, very successful guy, and not a career politician. He nicknamed Donnelly “sleepin’ Joe” after citing the Center for Effective Lawmaking, which named Donnelly the least effective Democrat in the Senate.