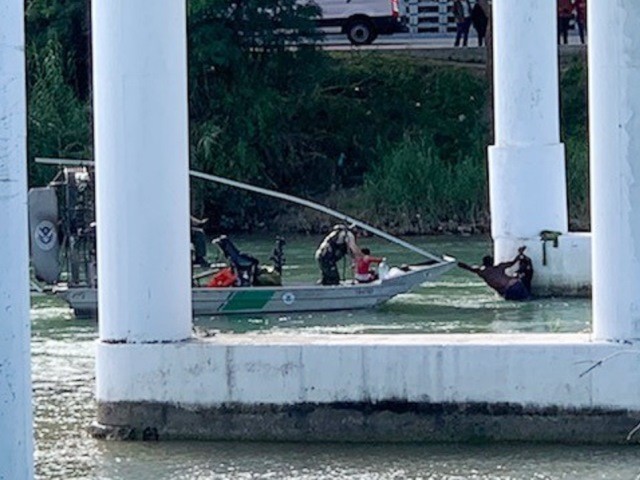 Eagle Pass Station agents patrolling the Rio Grande River in an airboat encountered a woman and three small children who had been swept away in the strong current as they attempted to illegally cross the border river, Del Rio Sector Border Patrol officials reported. Observing the four people in distress in the water, the agents quickly maneuvered their boat into position and pulled the woman and her three children to safety.

The agents transported the four Guatemalan migrants to the river bank where land-based agents identified the children as being ages two, four, and fifteen. An initial medical screening determined all four to be in good health and not requiring medical attention.

“Migrants continue to ignore the hazards and risk their lives attempting to cross the Rio Grande River,” Del Rio Sector Acting Chief Patrol Agent Louie W. Collins said in a written statement. “Had our Border Patrol agents not been in the area to respond quickly, the woman and her children would have more than likely drowned.”

The massive number of migrants crossing the border in this region caused an exponential increase in the number of rescue operations carried out by Del Rio Sector agents. “Our rescues are up 700 percent over last year to date,” a Del Rio Sector official told Breitbart News in response to an inquiry.

Agents in the area are being overwhelmed by large migrant group crossings. During a two-day period in March, Del Rio Sector agents apprehended more than 500 migrants after they crossed the river. Shortly before that, agents rescued a wheelchair-bound double-amputee migrant from an island in the middle of the river. Other agents that same week, saved two groups of migrants, including three young children, from drowning in the river.

Not all migrants are as lucky. Eagle Pass Station agents patrolling the river in late February came upon the floating body of a migrant who appeared to have drowned during his attempted illegal border crossing. He was the fifth migrant to die in the Del Rio Sector this fiscal year.

Eagle Pass Station agents recovered the body of another drowned migrant on February 14, not far from the scene where 17 other migrants had been rescued from the dangerous river, Breitbart News reported.

“The recovery of a deceased person is one of the grimmest tasks our agents carry out,” then Del Rio Sector Acting Chief Patrol Agent Matthew J. Hudak said in a written statement in March. “This tragic and most recent death highlights the danger and unpredictability of the Rio Grande River.”

Due to the overwhelming numbers of migrants crossing the border, Del Rio Sector officials announced what could be the most aggress catch and release program ever.

Border Patrol officials in several sectors, including the Del Rio Sector, began releasing thousands of migrants on their own recognizance shortly after they are apprehended at the border. The move comes in response to the massive increase of illegal border crossings by migrant families from Central America.

“This demographic is challenging in that they cannot be immediately returned to their country of origin,” Del Rio Sector Border Patrol officials stated. “U.S. Border Patrol processing centers are not designed to house the current numbers of families and small children that we are encountering.”