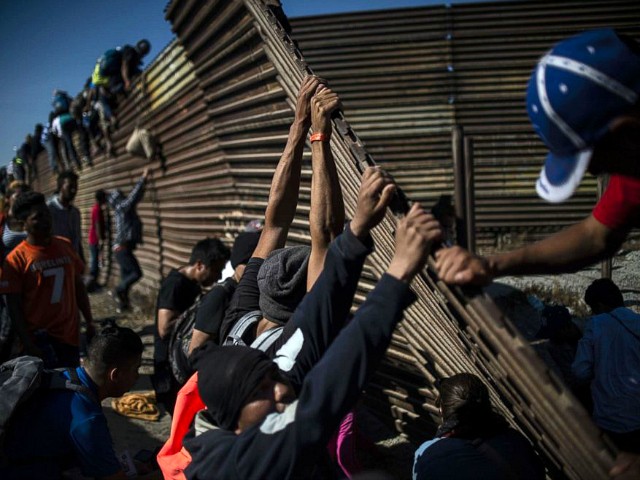 Caravan organizers allowed women and children to lead Sunday’s march on the border wall in San Ysidro, shortly before some tried to break through the barrier, according to at least one migrant.

The statements corroborate reports by officials at the Department of Homeland Security, who said  caravan organizers made women and children vulnerable before U.S. border officers had to use tear gas to repel aggressive young males trying to get through the border wall.

The DailyBeast reported from Mexico:

Luis Corrales, 35, a waiter from San Pedro Sula, didn’t expect any problems in the protest. He said the march set out to seek answers from U.S. officials, though he acknowledged some had hoped they could make their case to border patrol agents and enter the United States.

Women and children were walking at the front of the march, he said, “to see if they would let them enter.”

A November 27 statement from the caravan’s leaders said:

Last Sunday we were the victims of repression by the U.S. border patrol, who launched teargas at us several times, affecting the children. We were only walking so that we could be visible, so that they would recognize that we are a large group of people who just want to be heard so that international law can protect us as we migrate and seek to improve our lives.

A statement on Monday, November 26, from DHS Secretary Kirstjen Nielsen said the women and children were used as human shields:

The caravan members are predominately male. It appears in some cases that the limited number of women and children in the caravan are being used by the organizers as “human shields” when they confront law enforcement. They are being put at risk by the caravan organizers as we saw at the Mexico-Guatemala border. This is putting vulnerable people in harms way.

As always, I want to thank those officers and agents in San Ysidro who, under tremendous strain, used professionalism and restraint to ensure that no one was injured as they were attacked themselves. I also thank DOD and our state & local law enforcement who were on scene to support our people.”

What I find unconscionable is that people would take children intentionally into this situation. What we saw over and over yesterday was that the group, the caravan as we call them, would push women and children toward the front and then begin, basically, rocking our agents.

We try specifically to target the instigators, the person assaulting the agent. But as you saw, once that chemical is released, it does go through the air … I inhaled quite a bit of it yesterday.

Some of the videos and photos show women and children at the fragmented march, just before or after border officials began using tear gas.

The Trump administration has gone from locking babies in cages to firing tear gas at toddlers & mothers. The situation at the San Ysidro border crossing should horrify all Americans. These people have a right to seek asylum here. Denying them entry makes a mockery of our values. pic.twitter.com/weRgADQQ7F

CLASH AT THE BORDER: US Border Patrol agents fire tear gas canisters into crowds on Mexican side of the San Ysidro port of entry. https://t.co/cqJNNyaJN5 pic.twitter.com/QPnKnjwGfF

On November 27, the caravan organizers posted a statement and held a press conference to make their claim for entrance into the United States.