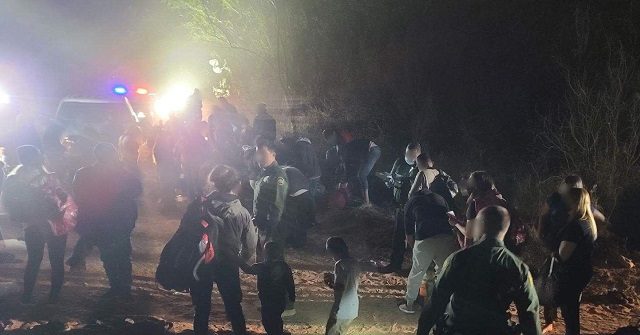 The apprehension of migrants illegally crossing the border in January nearly doubled the previous year. Agents apprehended nearly 154,000 in the last month of President Joe Biden’s first year in office.

In January 2021, President Donald Trump’s last month in office, Border Patrol agents apprehended 78,414 migrants who illegally crossed the border. This represents a drop of more than 53 percent from January 2020’s total of 36,585. With the election of Joe Biden in November 2020, those numbers quickly escalated in the months leading up to his inauguration.

In January 2021, agents apprehended 153,941 migrants, according to the January Southwest Land Border Encounters report. This represents an increase of 96.3 percent over the previous January when Biden eliminated the successful border security and immigration policies put in place by President Trump. The report sets the record for January apprehensions since the report began in January 2000.

In the 12 months following Biden’s inauguration and his subsequent policy changes, agents would apprehend more than 2.1 million migrants. Another 500,000 migrants were classified as “got aways” by Border Patrol officials.

In January, the Del Rio Sector became the busiest Border Patrol sector as agents apprehended 30,773 migrants — a jump of more than 176 percent from the previous year. For the first time, the Del Rio sector passed the Rio Grande Valley Sector which reported the apprehension of 30,180 migrants.

Biden’s border and immigration policies also appeared to draw more migrants from around the world. During the first four months of this fiscal year, migrants from other than Mexico and the Northern Triangle countries of El Salvador, Guatemala, and Honduras became the largest demographic. Of the  643,630 migrants apprehended during this period, 240,333 (37 percent) came from outside the North American continent. More than 224,000 came from Mexico while El Salvador, Guatemala, and Honduras accounted for just over 179,000.

CBP and DHS officials appear to have made no public comment on the release of the January report released on Friday afternoon.