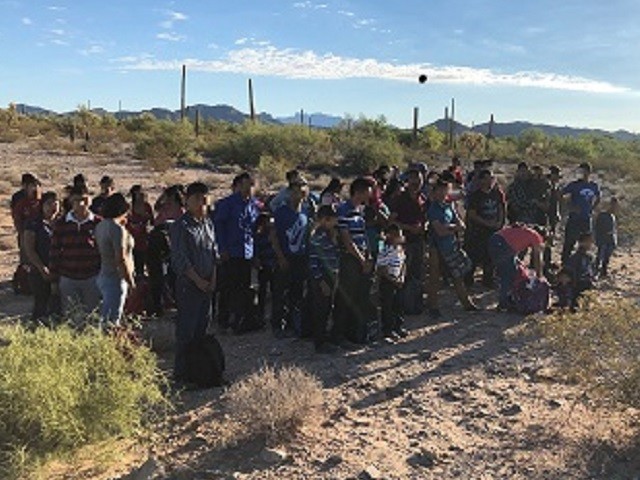 The arrests of migrants by Border Patrol agents between ports of entry along the U.S. border with Mexico jumped 30 percent in Fiscal Year 2018. Agents apprehended nearly 400,000 migrants, including more than 150,000 minors and family units.

During the just-ended Fiscal Year 2018, U.S. Border Patrol agents apprehended 396,579 migrants between ports of entry after they illegally crossed from Mexico, according to the FY2018 Southwest Border Migration Report released by U.S. Customs and Border Protection Tuesday afternoon. The arrests represent a 30 percent over the previous year’s total of 303,916.

During a conference call on Tuesday, senior administration officials told reporters there is a simple solution to the “flood of illegal aliens” who are arriving in “non-removable categories.”  The officials said they need to be able to be able to apply the same rules to Central American migrants that are applied to Mexican migrants — immediate removal. The current process takes more than a full year of federal government resources to remove just a few days worth of migrant arrivals under the current conditions.

The officials noted a massive increase in the numbers of Family Unit Aliens apprehended since July 2018. During the month of July, agents apprehended 9,253 family units. This category jumped to 12,760 in August and 16,658 in September. This represents an increase of more than 80 percent during the fourth quarter of the fiscal year.

The administration officials speaking on background said there has been a 1,700 percent increase in the number of asylum requests made during the past ten years. They said that because of the “low bar” set for asylum requests, approximately 20 percent of all claims are approved.

The officials said that as the federal government changes the criteria for asylum requests, the claims made at the border suddenly change to match the new requirements.

The Rio Grande Valley Sector in South Texas continues to lead the nation in the apprehension of Family Unit Aliens (FMUA) and Unaccompanied Alien Children (UAC). The sector witnessed a 27 percent increase in the number of FMUAs apprehended in 2018 compared to the previous fiscal year, officials reported. The number of families apprehended jumped from 49,896 in FY2017 to 63,278. The apprehension of UACs in this sector remained relatively flat 23,757 — an increase of 49 minors.

The largest increases in UAC apprehensions came in the Yuma Sector where agents apprehended 5,242 unaccompanied minors. This represents an increase of 89 percent over the prior year.

The Tucson and Yuma Sectors both witnessed considerable increases in the numbers of FMUAs apprehended. Tucson led the nine border sectors with a 143 percent increase in FMUA apprehensions, while Yuma trailed closely with a 140 percent increase.

The largest numbers of family units and unaccompanied minors came to the U.S. from Guatemala (50,401 and 22,327 respectively). Honduras came in second with 39,439 family units and 10,913 minors. These were followed by El Salvador and Mexico.