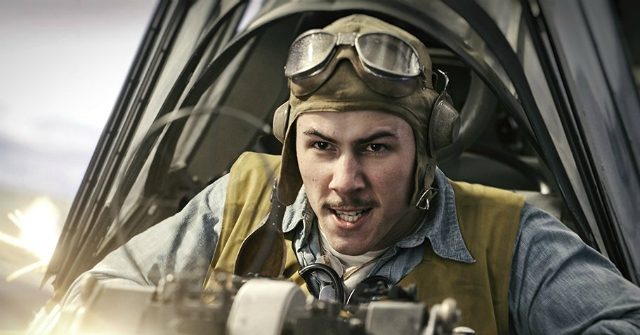 Just when you think they don’t make ’em like they used to, along comes Midway (2019).

Even the original Midway, the 1976 version (which I saw in the theater) that’s brimming with movie stars and recorded in surround sound, had its pretentious moments and criticisms of America, specifically a soapy subplot involving the son of a Naval captain.

Charlton Heston played that fictional captain, one of those invented movie characters who Forest Gumps his way through all the crucial events. His son Thomas (Edward Albert), is also a fictional character, and he’s in love with the American-born daughter of Japanese immigrants interred by President Roosevelt. It’s a ridiculous, offensive, and melodramatic subplot, so absurd it had to be invented, and it damages an otherwise solid retelling of the battle that changed the course of the war against the Imperial Japanese in the Pacific.

To their everlasting credit, in this superb retelling, director Roland Emmerich and screenwriter Wes Took, not only avoid any sort of pretension and tsk-tsking of America, they stick to the facts — and the facts are more than enough to keep you on the edge of your seat.

The story opens in Japan ,circa 1937, with US Naval Intelligence Officer Edwin T. Layton (Patrick Wilson) speaking with a Japanese Navy Admiral about the heart of the matter, which is Japan’s dependency on imported oil, even as that country ravages China and Southeast Asia.

Thanks to that conversation, a number of intercepted message, a gang of exceptional code breakers, and good instincts, Layton is certain the Japanese will hit Pearl Harbor. No one listens to him, and on December 7, 1941, we are hit with a devastating sneak attack that will always be remembered as one of America’s worst intelligence failures.

The result is that Layton stays on as his superior officer is replaced. Admiral Chester Nimitz (a fantastic Woody Harrelson) is now in charge of a demoralized fleet and informs Layton that it is his awesome responsibility to know what will happen before it happens.

Meanwhile, on the aircraft carrier USS Enterprise, a squadron of impossibly brave American pilots deal with all the anger, angst, camaraderie, egos, and sense of duty that comes with a job and enemy so dangerous you can hardly believe anyone would agree to do such a thing.

There is the brash and cocky Lieutenant Richard “Dick” Best (a superb Ed Skrein), the impossibly brave Bruno Galdo, a machinist’s mate who saved his carrier more than once, Lieutenant Commander Eugene Lindsey (Darren Criss), and a host of others mingling with Dennis Quaid’s gruff Bill Halsey and Jake Weber’s Rear Admiral Spruance.

Before getting to Midway, we witness the attack on Pearl Harbor, fly with Jimmy Doolittle over Tokyo for his  legendary bombing raid, and are treated to behind-the-scenes moments with the Japanese military as they strategize, bicker, and come to grips with the fact that their success in Pearl Harbor has only served to “awaken a sleeping giant and fill him with a terrible resolve.”

There’s even a wonderful subplot honoring John Ford, the Oscar-winning director who, in his middle age, abandoned Hollywood after Pearl Harbor to join the Navy. Early in the Midway battle, even after he’s wounded, he’s ordering his cameraman to “Keep shooting! Keep shooting!” This all happened, the result was Ford’s Oscar-winning documentary The Battle of Midway, and Emmerich’s tribute is a welcome one.

Although $100 million was spent on this 138-minute production, the CGI still looks like CGI, and can never top Tora Tora Tora’s (1970) breathtaking Pearl Harbor re-enactment. Nevertheless, Emmerich — the blockbuster director behind Independence Day (1996), The Patriot (2000),  and 2012 (2009), knows exactly what he’s doing and is able to choreograph the action so perfectly, you stop noticing the green screens and hold on tight as American dive bombers change the course of history with individual acts of heroism that at first thrill and then leave you in awe.

And there is not one stupid moment, not a single one of political correctness. Nor does the story tilt the other way.  Our boys refer to the Japanese as “Japs” without malice, in a shorthand way; the Japanese officers are portrayed with dignity, even during their own vainglorious moments. And as misguided as it oftentimes was, we see honor among the Japanese commanders and pilots.

What’s more, the movie accurately portrays the monstrous war crimes committed by the Imperial Japanese, crimes against our guys and, of course, the Chinese civilian population.

The sticky-sweet emotional manipulation of Michael Bay’s Pearl Harbor is nowhere to be seen, nor is the moral equivalency in Tom Hanks’ The Pacific or Clint Eastwood’s unfortunate Sands of Iwo Jima.

Emmerich’s story is about American men, the incredible commanders, pilots, and machinist mates who, though through their own individual acts of bravery and sense of duty, literally saved the world.

Midway is already a well-deserved hit at the box office, and a surprise hit that exceeded expectations and stomped all over Doctor Sleep, the latest, big-budget Stephen King adaptation. It also knocked out the politically correct romcom Last Christmas, and the all-girl Terminator.

That’s no fluke, either. A top-shelf director working with a big budget to honor American veterans with an exciting and respectful retelling of their heroism… You’d have to live in a bubble to be surprised by the appeal of such a thing. But so many in Hollywood do live in their bubble, the Chinese government had to step in to fund a portion of the production.

How pathetic is that? Just how craven is an American film industry that forces filmmakers to take the most American of American stories to the communist Chinese?