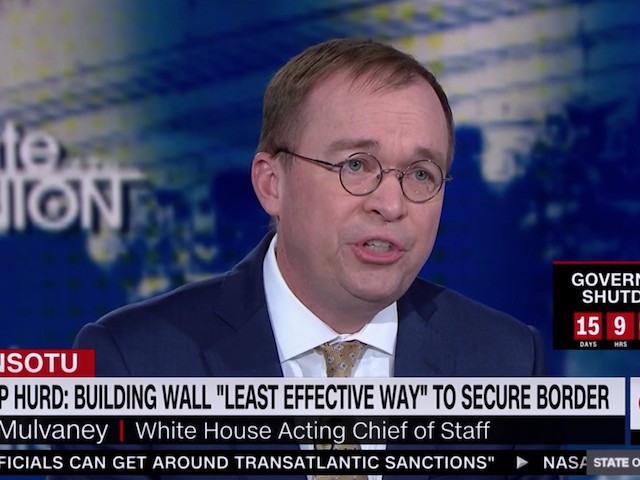 Sunday on CNN’s “State of the Union,” acting White House chief of staff Mick Mulvaney accused the Democrats of stalling the negotiations to reopen the government.

Mulvaney said, “The president said for a long time it’s $5.6 billion for border security, including the wall. We recognize that things like technology and border crossings are important. But certainly, a barrier is important. We didn’t make much progress at the meeting which was surprising to me. I thought we could come in to talk about places we agreed on, places we agreed to spend more time and attention, things to improve our border security and yet the opening line from one of the lead Democrat negotiators was that they were not there to talk about any agreement. They were actually, in my mind, there to stall. And we did not make much progress.”

He added, “They had a lot of technical complaints about data that they were asking for — for the first time. Things that we weren’t even aware they were interested in and the vice president and I have been talking to Chuck Schumer now for over two weeks, and this has never been raised with us before. That’s how they opened the meeting today and said they were not interested in having further discussions until they received this technical data from us and that the government was opened, which is very strange. The president yesterday accurately asked the question, ‘So you want me to negotiate opening the government after the government is already opened?’ So it was a very — it was a disappointing meeting.”