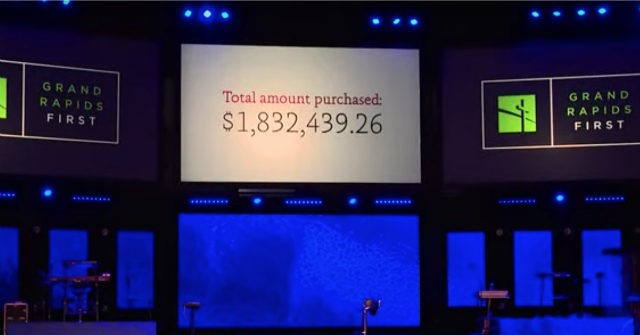 Grand Rapids First, a church in Wyoming, Michigan, announced on Sunday it will pay off the medical debt of 1,899 families.

The church paid nearly $2 million in medical bills for people suffering poverty. “Today, that $1,832,439.26 that’s looming over families right now, those families that are living at poverty rates or less, has been paid in full as a result of a gift from this church,” lead pastor Sam Rijfkogel told the congregation during his Sunday sermon. “Paid in full, not held against them one bit.”

Rijfkogel first learned of the medical debt forgiveness programs when a Texas church made headlines for paying off $10 million in medical debt within its community. Grand Rapids First Executive Pastor and CFO Doug Tuttle said that through this process, they learned of the massive weight of medical debt hanging over poor families in their state — nearly $180 million.

The church bought the debt for only $15,000 from nonprofit debt purchasing organization RIP Medical Debt. RIPMD will send letters notifying the fortunate families from Kent, Ottawa, Allegan, and Ionia this week. Due to medical privacy laws, the church will not know the identities of those it has blessed with its offering.

Tuttle said the money was taken from the church’s “missions” budget, so fundraising to cover the cost was unnecessary.