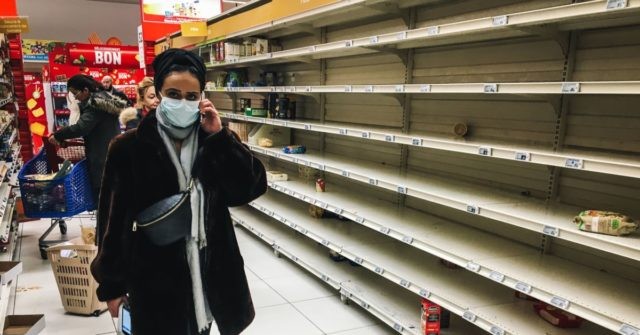 In an interview with Peterson published last week, Yon used a neologism he coined — “PanFaWar” — synthesizing “pandemic,” “famine,” and “war” into one term. The three phenomena, he said, are mutually reinforcing and often occur as a package.

Yon exposited on what he framed as a cascade of catastrophes involving disease, food shortages, and war:

Having studied war for so many years, not just kinetic war and the shootouts, and all that I did for years back when I was quite skinny and running around in the wars — but there’s also information war, which is the PhD level of warfare, and then there’s these other components that people must study if they’re going to be a serious student of war, which is migration, pandemic and famine. They always go together, period.

Yon linked massive flows of migration driven by left-wing politics — including those pushed by the World Economic Forum (WEF) — to what he forecasted as an incoming human catastrophe. Migration to the U.S. from South America “is increasing at a very high rate,” he said.

I call it HOP, human osmotic pressure, the push and pull of migration — is greatly fueled by information campaigns, which I’ve seen in Columbia, for instance, on CNN, encouraging people to go north. Another thing that causes HOP is war, famine, pandemic, and also the economic negative pressure which would draw you into another place. The positive pressure pushes you out and the negative pressure pushes you in, and this is really dramatically expanding it.

“We’re really heading into the most epic famines that have ever happened in human history,” he predicted.

Yon reflected on the millions of deaths in the 20th century caused by starvation due to government-created famines as he examined contemporary state decrees restricting food production and distribution via ostensibly environmental “climate change” policies to reduce greenhouse gas emissions.

“The largest famines are always caused not by locusts and drought, they’re caused by people taking advantage of these things,” he stated, “like the Holodomor in 1932 and 1933 in Ukraine.”

Yon observed how modern propaganda campaigns pushed by today’s governments, their media allies, and ideologically and financially aligned institutions denigrate farmers, truckers, and other laboring groups as the Soviet Union did to peasant farmers it deemed “kulaks.”

Kulaks were slated for destruction by the Soviet Union — including mass murder and exile — as the state seized farmers’ land and assets as part of “collectivization” program.

“In Netherlands, there is a information campaign to make the farmers look like bad guys here, as well. These are the new kulaks.”

Canadian politicians and news media figures similarly derided the conduct of trucker demonstrators and their supporters as “terrorism” during the past winter’s Freedom Convoy protests in Ottawa, ON.

Yon highlighted the centrality of “information war” to the phenomena he examined. “The substrate for everything going on is information war,” he held. He identified WEF as an essential institution advancing globalist measures.

“This is a long road,” he stated. “It’s a knock-down drag out fight. … We’re actually making progress against the WEF. … No plan ever survives first contact with the enemy, and now we are the enemy for WEF, and now that millions of people are waking up — it seems like by the week at this point — WEF is suddenly in for an actual real fight.”