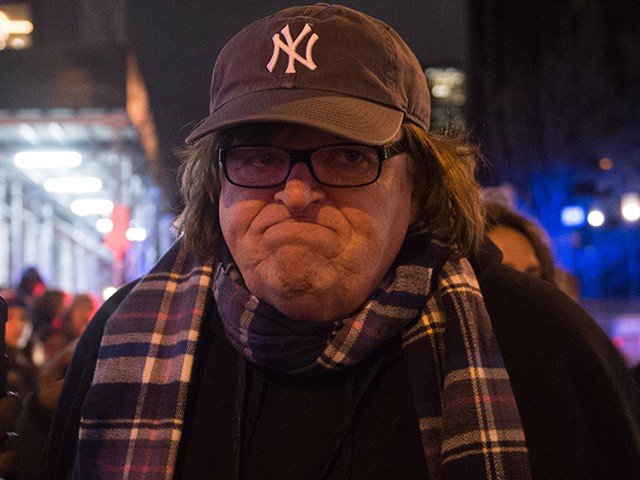 Left-wing filmmaker Michael Moore claimed Friday morning that Republicans prevent African-Americans from voting because it is the only way they can win elections.

Reacting to a tweet via Mother Jones’ Ari Berman, in which he accused Republicans of being “terrified of free and fair elections,” Michael Moore said: “It has to feel awful knowing that your side is outnumbered by the millions and the only way you can hang on to any power is to simply rig it/steal it/prevent black people from voting. That is the work of cowards.”

It has to feel awful knowing that your side is outnumbered by the millions and the only way you can hang on to any power is to simply rig it/steal it/prevent black people from voting. That is the work of cowards. https://t.co/ffGxaPDUHv

Moore’s tweet comes as Gov. Rick Scott (R-FL) is alleging that elections officials in South Florida are trying to “steal” the election for Democrats as razor-thin margins raise the specter of recounts and court battles in the state’s races for Senate and governor.

In the governor’s race, Democrat Andrew Gillum’s campaign said Thursday it’s readying for a possible recount. The race has tightened since he conceded to Republican Ron DeSantis on Tuesday night. As of Thursday afternoon, DeSantis led Gillum by 0.47 percentage point.

Incumbent Sen. Bill Nelson (D-FL) has begun preparing for a potential recount in a race still too close to call against Scott, who is leaving the governor’s seat because of term limits. Nelson’s lawyer called that race a “jump ball.” Scott’s campaign urged Nelson to concede. Scott held a 0.21 percentage lead over Nelson on Thursday afternoon.

With the passage of Florida’s Amendment 4, close to 1.5 million former felons will not be able to vote. “Black people, who are disproportionately arrested and incarcerated, will benefit the most. In 2016, more than 418,000 black people out of a black voting-age population of more than 2.3 million, or 17.9 percent of potential black voters in Florida, had finished sentences but couldn’t vote due to a felony record, according to the Sentencing Project,” Vox reports. However, as the left-leaning news outlet points out, there is no way of knowing how the newly passed measure will impact future election outcomes. Further, Vox does not explicitly state Gillum would have won Florida’s gubernatorial race had the measure been passed earlier.

Kemp resigned Thursday as Georgia’s secretary of state, removing himself from the ongoing count of the governor’s election he says he’s already won.

Kemp made his announcement in the governor’s office of the Georgia Capitol, standing beside the man he plans to replace in January. Republican Gov. Nathan Deal called Kemp “the governor-elect” and both said they would begin transition work together.

“We won a clear and convincing victory,” Kemp said of returns showing him with 50.3 percent of almost 4 million votes, about a 63,000-vote lead over Democrat Stacey Abrams. That’s a narrow sum considering the near-presidential election year turnout, though sufficient for the majority required for outright victory.

While Moore’s tweet makes no reference to the Georgia gubernatorial race, Kemp is accused of placing a hold on approximately 37,100 African-American voter registration applications. The move comes as Kemp’s former office is currently investigating the state’s Democrat Party for possible cyber crimes.

Abrams maintained there are enough uncounted ballots to force a December runoff in one of the marquee matchups of the 2018 midterm elections.

With legal wrangles opening on what votes to count and how, the dispute is prolonging a bitter contest awash in historical significance and national political impact. Abrams hopes to become the first black woman elected governor of any American state. Kemp seeks to maintain Republican dominance in a growing, diversifying Deep South state positioned to become a presidential battleground.

The key question is how many uncounted ballots actually remain. Kemp says it’s less than 21,000 — almost certainly not enough to force a runoff. The elections chief from the secretary of state’s office said in a federal court hearing Thursday afternoon that the number is 21,190.

“Even if she got 100 percent of those votes, we still win,” Kemp told reporters.

Abrams’ campaign argues the total could be higher, and the secretary of state’s office has been scant in sharing details as officials in Georgia’s 159 counties keep counting.