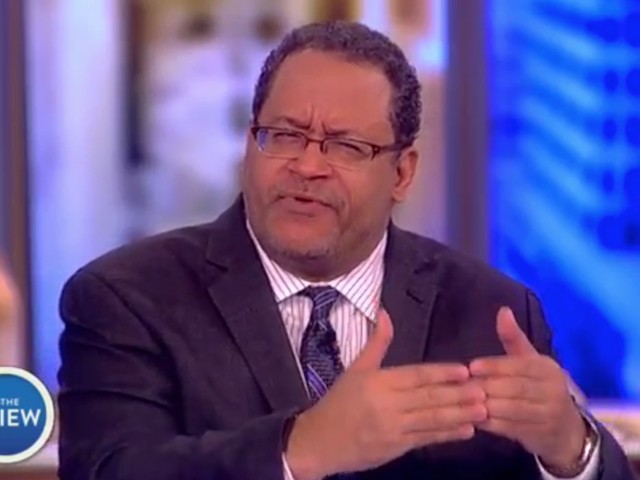 While discussing Nike canceling a release of shoes featuring the Ross flag after former NFL quarterback Colin Kaepernick objected, Dyson said, “It hails from the revolutionary period of this nation’s founding which was deeply embroiled in, you know in enslavement, of the owners of slaves, George Washington, Thomas Jefferson and the like. But also it’s the recent use of this flag that has been the most opprobrious. Right-wing white supremacists have used it as a rallying cry for their own cause. None of these flags are set in stone. It’s the moral ecology of the time. Right now this flag has been used by people who want to pummel African-Americans, Latinos, Jews and other people, Neo-Nazis that want to claim that they have the true copyright on American identity. So why not choose a flag that is representative of everybody? The diversity of identities, ideologies, people of color and mainstream people who exist in this country? That’s the kind of blowback against the use of this particular flag.”

Jackson asked, “What about the argument that some have made that this is PC culture run amok if you will? If Nike wants to put this flag on their shoe, why are people so upset about it?

Dyson said, “Words matter. Symbols matter, too, Why don’t we wear a swastika for July 4th? Because I don’t know, it makes a difference. The cross-burning on somebody’s lawn. Why don’t we just have a Nike celebration of the —well because those symbols are symbols of hate. So we can take PC culture back.”