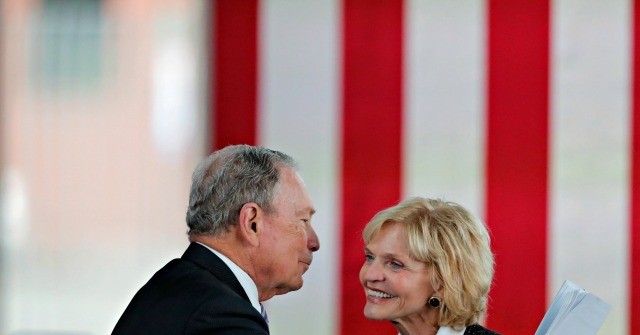 Bloomberg’s latest endorsement came as he returned to Raleigh, North Carolina, on Thursday and received an introduction from Perdue.

Throughout her time in the North Carolina governor’s mansion, Perdue created a long list of scandals, including the desire to suspend elections and an attempt to downplay sexual harassment allegations against a top North Carolina Democrat official.

“Let me be clear,” Bloomberg continued. “I am running to defeat Donald Trump.”

Bloomberg also claimed President Donald Trump is “scared” because he has taken a look at Bloomberg’s poll numbers. “He’s seen our poll numbers and he’s scared,“ Bloomberg said. “We all know Trump is a bully. But we know how to deal with bullies.”

Perdue commended Bloomberg on his candidacy, saying she believes he can sway Independents and Republicans to follow him.

“I wanted somebody who was a doer, who was an adult in the room who could fix things,” Perdue told the Charlotte Observer. “I think he’s the only candidate in the race to have the potential to bring independents and Republicans along with him.”

In September of 2011, Perdue suggested suspending congressional elections in order to help the “country recover.”

Perdue said at the time, according to the Raleigh News & Observer:

I think we ought to suspend, perhaps, elections for Congress for two years and just tell them we won’t hold it against them, whatever decisions they make, to just let them help this country recover. I really hope that someone can agree with me on that.

Perdue also believed that temporarily halting elections would allow members of Congress to focus on the economy. “You have to have more ability from Congress, I think, to work together and to get over the partisan bickering and focus on fixing things,” Perdue added.

After her remarks were made, Perdue spokesperson Chris Mackey claimed it was a joke and “hyperbole.”

Perdue attempted to downplay the actions of Parmley, telling a reporter to “Get over it.” It was later revealed that Perdue had known about the harassment allegations for quite some time before they were made public.

At the time, the Daily Caller was the first outlet to report on emails “between high-ranking party officials that confirmed the allegations of sexual harassment and that the party made a financial settlement with Ortega before having Ortega and Parmley both sign non-disclosure agreements to keep the scandal quiet.”

Parmley later resigned after Perdue publicly requested that he do so for the “good of the party.”

Former Charlotte Mayor Pat McCrory, a Republican, went on to succeed Perdue in North Carolina and take back the governor’s mansion for the GOP, a defeat blamed almost entirely on Perdue’s actions while in office.